Twitter Considering New Features Including Tweeting Only to ‘Trusted Friends’

Twitter is looking at a selection of new options to perhaps bring into the fold of its social media platform. Amongst the concepts the company is considering, a feature to tweet only at “Trusted Friends” and the idea of tweeting from different personas are in the fray.

As reported by TechCrunch, the social media company Twitter is discussing and analyzing new concepts it hopes to one day roll out for the general user. Many of these options are centred around enabling users to control who sees their tweets and who receives them.

The first concept is the option to tweet to only “Trusted Friends”. Similar to how Instagram allows users to share stories with “Close Friends”, this would enable users to select their closest friends, family, or a small network of people and categorize them as “Trusted Friends”. Users could then publish a tweet that only those selected users could see and reply to. 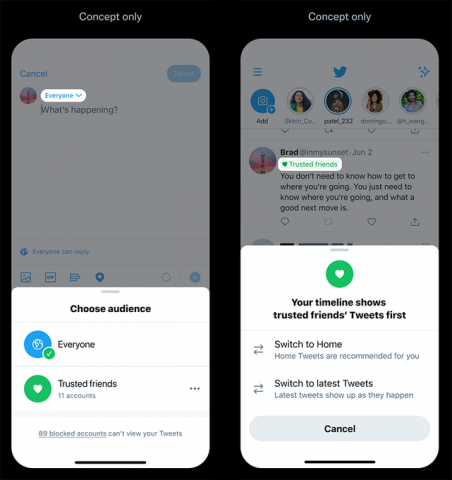 This concept would allow users to publish public conversations and messages, which is par for the course right now. Though, it would also give users the option to host more private conversations with other users. However, Twitter is considering the ramifications of how this may affect the platform. When taking into account how these private messages would affect engagement, Twitter also believes that it would rectify many workarounds some users have ie: creating alt accounts or switching between public and protected tweets.

Another major concept up Twitter’s sleeve is dubbed “Facets”. This early idea is focused on how a user can tweet from different personas all tied to a single account. Twitter states that idea would be most beneficial for those who want to keep separate hobbies or aspects of their life separate from one another ie: work and leisure.

It’s been reported that the Facets option would give other users the chance to subscribe to all tweets or pick and choose the “facet” that interests them the most. For instance, they could choose to follow a facet that is dedicated to films and television but ignore the facet about sports.

Finally, Twitter is tooling around with Reply Language Prompts, which would allow users to set restrictions on words they don’t want to see in their replies. This could be as simple as offensive language, the replied would then receive a prompt highlighting said word and explaining why the user does not wish to receive it.

Twitter has not decided one of or another if any of these three concepts will move forward. None of them are even in the building phase. The company is hoping to gain user feedback on the concepts to help determine the next course of action.