Twitter has unveiled the latest batch of gaming insights on the platform. Rounding out the fourth quarter of 2021, Twitter saw the largest increase in video game conversations, with more than 2.4 billion tweets published about video games.

In a blog post, Twitter’s head of gaming content Rishi Chadha revealed that Q4 2021 saw a major increase in conversations regarding gaming publishers, media, streaming, and esports. When compared to 2017, Twitter has seen an increase in more than 10 times the number of gaming-related tweets. As the year began to conclude, Twitter recognized a number of points of interest in the industry. Xbox’s Halo Infinite drove a lot of attention as well as the rising topic of NFTs in games.

For comparison’s sake, Twitter Canada’s Cam Gordon provided a Canada-specific breakdown of the top 10 biggest games of 2021 on Twitter. Of course, the usual suspects of Genshin Impact, Minecraft, Fortnite, and Animal Crossing: New Horizons all continue to make the list. Though, the likes of Call of Duty, Super Mario, and The Legend of Zelda snuck in on the Canadian side of things. 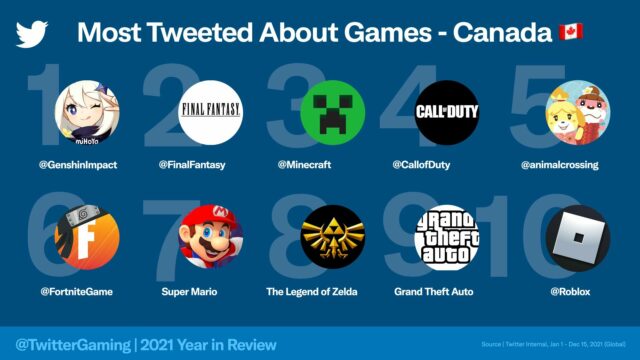 Other interesting categories include Most Talked About Gaming Events:

Despite a year of game delays and virtual events, the gaming industry persevered and delivered a year’s worth of exciting content. 2022 is just beginning so it will be interesting to see how the landscape changes and grows on Twitter throughout the year.

Feds Quietly Relax ArriveCAN App Requirements at the Border The federal government quietly implemented a one-time ArriveCAN exception for travellers crossing into Canada by land — reports The National Post. Every individual coming into Canada is required to provide their personal and vaccination information on the ArriveCAN app for their border crossing to be processed....
Nehal Malik
19 hours ago