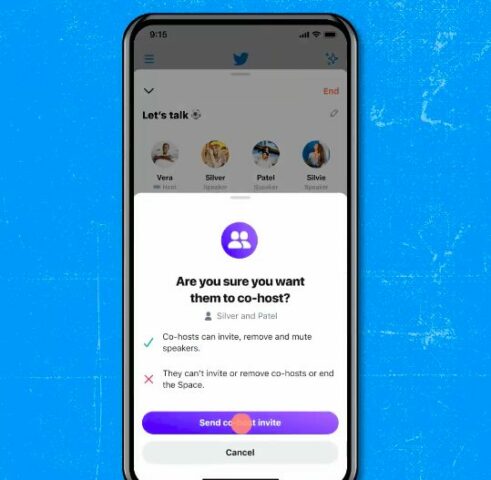 Twitter is now integrating a new co-host feature into Spaces, allowing hosts to add up to two co-hosts. Designated co-hosts can not only take part in speaking in the room but help in moderating and managing the Spaces room.

With the new feature, Twitter Spaces hosts can invite up to two co-hosts into the room. Co-hosts will then be given practically the same perks and tools the main host and organizer possesses, according to the Spaces Twitter account. Hosts will be able to send invitations to speakers, manage incoming requests, pin Tweets, and remove participants.

making it easier to manage your Space…introducing co-hosting!

That said, co-hosts will have a few limitations in place. For instance, only the main host can invite a co-host. A selected co-host will be unable to add a second. On top of that, co-hosts can’t remove another co-host from the room or end the Spaces session. Again, this will only be designated to the main host participant.

Along with the introduction of co-hosts, Twitter is expanding the limitations of each Spaces room. Participants can now include up to a single host, two co-hosts, and 10 speakers all at the same time. Prior to this, a Twitter Spaces room was capped at 10 participants in total.

This new addition to Spaces is yet another way for Twitter to stay an active competitor to Clubhouse. Additionally, now that Twitter has pulled the axe on its Fleets feature, it appears as though some of the attention may go over to Spaces.