One of the time-honored traditions in sports is carving the names of members of Stanley Cup-winning teams onto the iconic trophy, and the National Hockey League teamed up with Twitter to enable some fans to have their shot at immortality, as well. 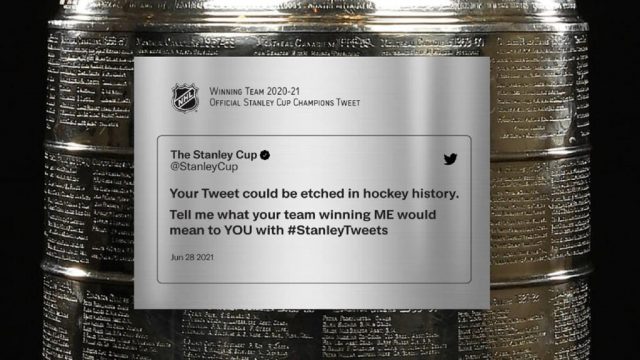 According to a new press release from the NHL, fans can tweet directly to the @StanleyCup account with the hashtag #StanleyTweets, and up to 52 of those tweets will be engraved into a first-of-its kind installation at the Hockey Hall of Fame in Toronto, featured alongside the Stanley Cup and other official NHL trophies.

The goal is to pick 52 tweets — in multiple languages — to correspond to the 52 names the winning team gets on the Cup each season. NHL social media director Sean Dennison said the hope is for tweets that evoke emotion and sentimentality with some humor mixed in.

“We want this to be as symbolic of the Cup as possible and since 52 names get put on the Cup, let’s recognize 52 fans,” he said. “The modern day fan experience really does take place on social media and especially on Twitter. It captures what people are saying, and I think that’s an important part of the story for our sport and for a Stanley Cup win.”

“The thought was really finding a way to give fans recognition for their commitment the same way that we would with the players themselves,” NHL executive vice president and chief marketing officer Heidi Browning said.

The social media endeavor launches on the day of Game 1 of the final between the Montreal Canadiens and Tampa Bay Lightning. While the Lightning are trying to win back to back, the Canadiens are looking for their first championship since 1993.

Apple supplier Murata Manufacturing Co. expects the tech giant to further cut iPhone 14 production in the coming months due to weakening demand — reports Bloomberg. Demand for some of Apple's latest iPhones has been underwhelming, with the company previously trimming iPhone 14 Plus orders by 40%. The waning demand is a function of stunted...
Nehal Malik
41 mins ago