The U.S. Department of Homeland Security has today issued a new report warning security agencies that all Android phones should have an antivirus software installed, highlighting that Google’s mobile operating system currently accounts for the vast majority of mobile malware, AppleInsider reports. The report notes that 44% of Android users, who are still running an outdated version of the OS known as “Gingerbread,” are at the highest risk of malicious software. 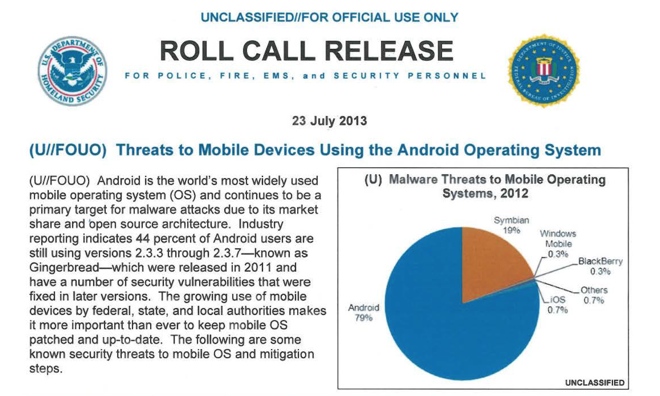 Almost half of the malicious apps found on older versions of Android are so-called “text message trojans”, using which hackers can send text messages to premium-rate numbers, resulting in charges to the user. The Homeland Security has also highlighted threats like rootkits, which log data such as locations, keystrokes and passwords, and fake Google Play domains, which trick users into installing malicious software that can steal sensitive information.

To address these issues, the government recommends that agencies require Android-based phones have security suites installed that can combat malware threats. Users are also advised to install “Carrier IQ Test” to detect malicious software, and to regularly update their Android antivirus software.

While Android accounts for most mobile malware, the second largest platform for malicious software, based on F-Secure’s data, is Nokia’s outgoing Symbian platform, which is home to 19 percent of malware threats. Apple’s iOS comes in distant third with 0.7 percent, while Windows Mobile and BlackBerry are each home to 0.3 percent of malware threats.

The same F-Secure report was also cited by Apple’s head of worldwide marketing Phil Schiller in March, when he tweeted advising users to “be safe out there.”