Apple’s “rubber-banding” patent, which addresses the ability of graphics on iOS devices to bounce back when the user scrolls to the top or bottom of the page, has been ruled invalid in a “Final Office Action” by the US Patent and Trademark Office, reports FOSS Patents. Apple had used the patent in its lawsuit against Samsung that resulted in a $1 billion judgment. However, this new Office ruling could significantly change the course of the post-trial proceedings. 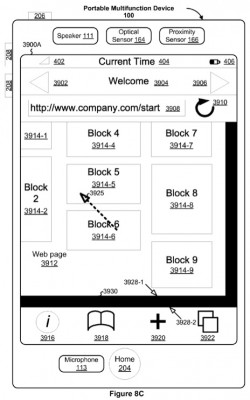 The source notes that while the Office action is “final,” Apple can still appeal the decision to a trial and appeal board, a process that could take years. Meanwhile, Samsung could bring the final action to the court in a bid to get favor with Apple v. Samsung presiding Judge Lucy Koh, as the post-trial processdings continue. While Apple wants to hold a new trial for damages related to 14 Samsung products, the Korean company is seeking a partial final judgment so that it can appeal the ruling with the Federal Circuit.

While Apple has made some progress since the first Office action and the USPTO’s Central Reexamination Unit has now confirmed claims 14, 17 and 18, the other 17 claims of this patent (1-13, 15, 16, 19, 20) have been rejected once again. The “final” rejection also relates to the claim-in-suit in the ongoing Apple v. Samsung litigation, claim 19.

Apple now has two months (which can be extended) to respond. Again, the word “final” sounds more definitive than this really is. Sometimes the Central Reexamination Unit reconsiders such “final” decisions.

It must be pointed out that since the jury awarded damages to Apple per-product and not per-patent, invalidation of claim 19 could require a completely new trial for all products at issue in the Federal Circuit.

Apple CEO Tim Cook recently sat down for an interview with BBC. Throughout the interview, Cook addressed the topic of the lack of women in the tech industry. On top of that, the CEO discussed EarPods, as well as the expected impact AR may have in the coming years. While speaking with BBC, Cook made...
Steve Vegvari
11 hours ago