Uber has until February 28 to comply and reimburse clients, or it will face a class-action lawsuit, Juripop lawyer Marc-Antoine Cloutier told CBC News. Another 20 people have also contacted Juripop for support regarding Uber surge pricing as well. 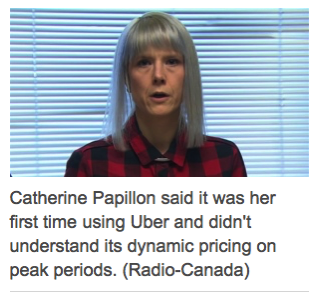 Papillon, a first-time Uber user, was charged surge pricing of $82.20 on January 1 for her ride, versus the regular rate of about $10, which Juripop claims the ride-sharing service “clearly profited unfairly from its dominant position in relation to users who have accepted the terms of the contract, which is a clear violation of its duty to be loyal to them.” The Montreal resident told CBC News she “didn’t understand its dynamic pricing on peak periods.”

An Uber spokesman said the company will not comply with the request, because users are clearly notified of surge pricing increases and must give clear consent before proceeding within the app. Users also have the option to be notified when surge prices end.

Jean-Christophe de le Rue told CBC News “Uber was a reliable option to take people home safely on New Year’s Eve,” adding “This would not have been possible without the dynamic pricing.”

On January 1, tens of thousands of Montrealers used Uber to get home, explained de le Rue, noting the average price increase was only 2.2 times the normal rate.

Uber Canada has made headlines recently, after an Edmonton man agreed to surge pricing of $1,100 on his New Year’s Eve ride—with Uber agreeing to later refund half of his bill.