Uber announced yesterday the launch of Family Profiles in the United States, available only in Atlanta, Dallas and Phoenix at launch.

Essentially Family Profiles allows up to 10 riders to share one payment method, managed by the Family Profile organizer. Uber says this is a way to make it easy to pay for rides for family and friends. 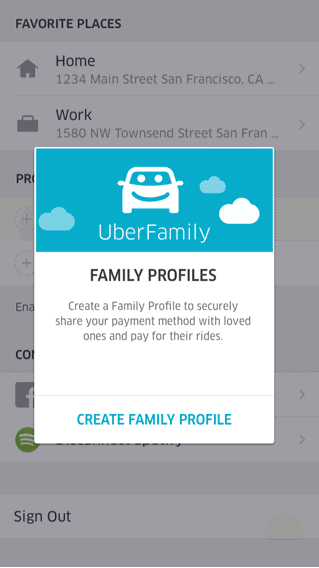 When a Family Profile organizer invites contacts to join their ‘family’, the invitees will then have a new option to choose the Family Profile as the payment option.

Uber explains this new feature will allow parents to help out their kids away at college for example, or for a daughter or son to “help your parents maintain their independence.”

While the feature is not available in Canada, and with no timeline for the feature to launch here yet, it does provide a picture of where the Uber app is going.

The company also celebrated its fourth anniversary in Toronto yesterday, revealing some interesting numbers from its operations since it launched back in 2012:

Check out the Uber Toronto 4th anniversary video below: