Uber Petition to Bring Ridesharing to BC Nears 30,000 Supporters

The B.C. government announced last month ride sharing would finally land in the province by December of this year, making the issue front and centre ahead of the provincial election next month (May 9).

In an email blast yesterday, Uber tells people in BC to sign their petition, which will let local candidates know about your support for ride sharing in the province. 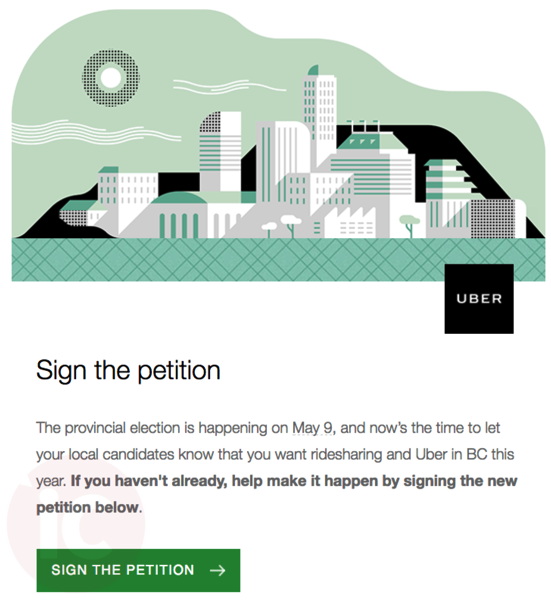 Uber explained, “By signing the petition, you’ll be doing more than just adding your name to a list—we’ll be sharing the aggregate results with all political parties across BC in order to show them how much British Columbians like you want ridesharing in your community.”

Uber says over 250,000 people in BC have downloaded the Uber app, while “over 350,000 tourists have tried to use the app in BC since 2015.” The company, which has faced resistance from local taxi companies, says people in BC “want and need access to more safe, affordable, reliable transportation options across the province. This shouldn’t be political.”

The petition launched yesterday and currently has 28,760 supporters as of writing, just 1,240 away from its goal of 30,000 signatures.

Last month, the Federal government announced in its new 2017 budget, ridesharing services like Uber would need to start charging GST/HST on rides.

The company last week urged Canadians to write into their Members of Parliament to fight the tax, with Uber spokesperson Susie Heath saying “Given the broad implications of this announced policy, we felt we had the responsibility to inform Canadians who rely on ride-sharing as riders and drivers,” and “We’ve encouraged them to share their views on how affordable transportation is good policy for cities and for Canadians.”