UberEATS Launches in Toronto, Will Deliver Food in 10 Minutes or Less [u]

Uber has launched UberEATS in Toronto, which lets you order food from local restaurants and have it delivered in 10 minutes or less. Available during weekdays from 11AM to 2PM, UberEats also lets you share the cost with a Fare Split feature if you’re ordering with others.

According to a tweet this morning from Uber, it’s ‘treating’ the city to free delivery, probably for today only (we’ve asked for clarification)?

Update: Free delivery is for this week and next:

@iPhoneinCanada Hey there! The first two weeks "this week and next" 🙂

Let's #UberEATS! Now serving up @BarBuca with @ChefRobGentile to Toronto. Plus, we're treating the city to free delivery, so dig in!

The services comes with a $3 flat delivery fee per order, regardless of the number of meals you place. Everyday, participating Toronto restaurants release new menus for customers to choose from. You just place your order from the Uber app, then wait curbside for your food to arrive, at a location you decide within the coverage area.

Below is a coverage map for Toronto: 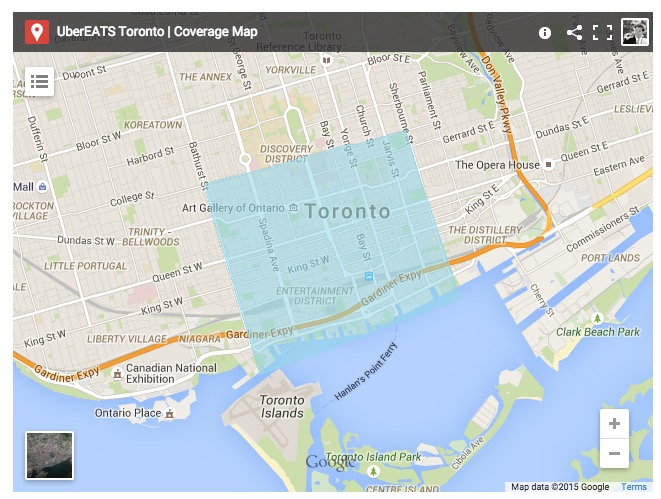 Looking at the daily menus, these meals are made for speedy deliveries and convenience, so if you’re too busy to go wait in line and grab lunch, let UberEATS do the work for you. Of course, it does come at a cost ($3 per delivery), but time is money.

Another alternative if you’re in the Toronto area to avoid waiting in line is using the app Grabb, which allows users to pre-order and pay for food right from your iPhone.