An app researcher has discovered an app that required users to give it at least a three-star review before using it. 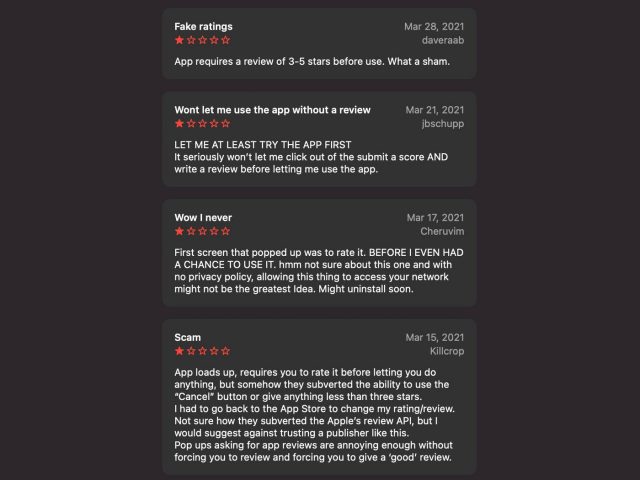 Revealed by app researcher Kosta Eleftheriou, the UPNP Xtreme app (which has since been removed from the App Store) was an app that supposedly gave people a way to stream content from their phone to their TV, but in order to even use the app, you had to first leave a review.

Not only is review requests at launch a no-no with Apple, but the app developers had the app set up so users couldn’t leave a 1- or 2-star reviews — the app refused to function before you give it at least a 3-star review in the App Store.

The review: “This app forced me to give it a good rating before I could use it.”

The app is no longer available, but The Verge was able to confirm the review prompt before it was removed. The app had over 15 million downloads and Eleftheriou says the app has made “millions.”

“This is just the latest scammy app to have been unearthed by Elefheriou, who’s been waging a war against them after his own Apple Watch keyboard app, FlickType, was overtaken by expensive apps with fake reviews,” reads the report. “Eleftheriou says Apple has removed over 100 apps as a result of his reports, but it’s concerning that the multi-billion dollar company isn’t catching these scams during its App Store review process.”

This blatant oversight from Apple makes one wonder how an app like this made it through Apple’s moderation tools and team. The app isn’t obscure or hard-to-find, and it literally starts breaking the rules upon launch.

Further into the Twitter thread, Eleftheriou states, “If you think you can trust App Store ratings, you haven’t been paying enough attention. […] The worst part? This trick is EXTREMELY easy for any developer to do, and not limited to this app.”