Apple announced their USB Power Adapter Takeback Program a week ago but it has been recently updated to include countries outside the USA and China (via 9to5Mac). Canada is now included along with Australia, France, Germany, Japan and the United Kingdom. 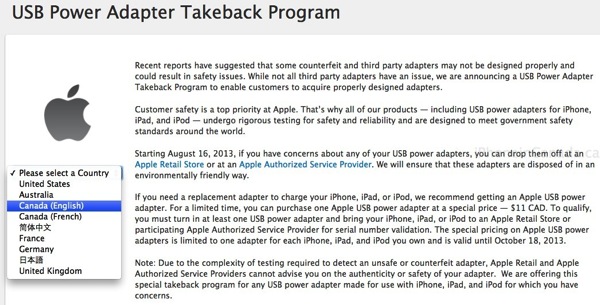 A drop down menu displays an option to select your country, which then reveals appropriate pricing. In our case, a replacement USB power adapter will cost $11 in Canada (versus $10 in the USA; blame the exchange rate?):

You will be required to trade in a third party adapter to qualify for the program, which starts in three days and ends on October 18, 2013. Anyone going to jump on this?