We will offer the WiFi Hotspot feature should Apple choose to enable it here in Canada. We canâ€™t comment further until we know that the feature will be available in Canada.

Update 2: iPhoneinCanada.ca reader ‘Jordan’ sent us this dialog between himself and @Rogers_Chris this morning (January 26, 2011). It seems that the choice of whether to even allow Personal Hotspot in Canada is being considered, let alone if it will be free or not:

Update 1: @chrisleboe forwarded us the following tweet received from Rogers via twitter. He asked about Personal Hotspot being free, and Rogers responded they offer the similar service already on other phones. So this should indicate the feature will be free, if anything. 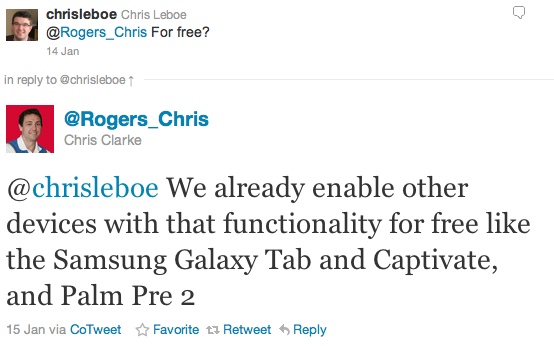 I am fairly certain iPhone users saw this coming.

It looks like Apple’s new â€œPersonal Hotspotâ€ feature in iOS 4.3, which at this time allows Verizon iPhone 4 users to share their 3G internet connection over WiFi to up to five other devices, such as a laptop or iPad, is going to cost Verizon users an additional $20/month on top of their regular monthly service fee.

Raney said that Verizon iPhone owners will be able to take advantage of the 3G wireless hotspot feature for an extra $20 per month on top of the iPhone’s required voice and data plans–that’s the same price that applies to current Verizon smartphone owners.

So the question becomes, will Canadians have to deal with a similar fee? Maybe. After all, it is an easy cash grab for Belus and Robbe…err…Rogers.

Currently, the Canadian wireless carriers do not charge for iPhone tethering. They do however charge to tether your iPad to your existing wireless data plan.

So will they charge us for Personal Hotspot? Hopefully not. Will they give more data? Very unlikely. We will probably use our existing wireless data plan such as in the iPhone/iPad set up.

When I first heard about Personal Hotspot, I figured I would not need MyWi anymore. But it looks like jailbreaking and MyWi are still useful after all.