Vodafone UK’s product page for a signal booster device called Vodafone Sure Signal is now showing iPhone 5 in the list of compatible devices with only 16Gb and 32GB models in both black & white colors. As noted by AppleInsider, the listing implies the next generation iPhone handset will have the same lineup as the iPhone 4, as there is no mention of a 64GB version in either of the two color options. The source however does believe that this could simply be a typing error or may be just a presumption. 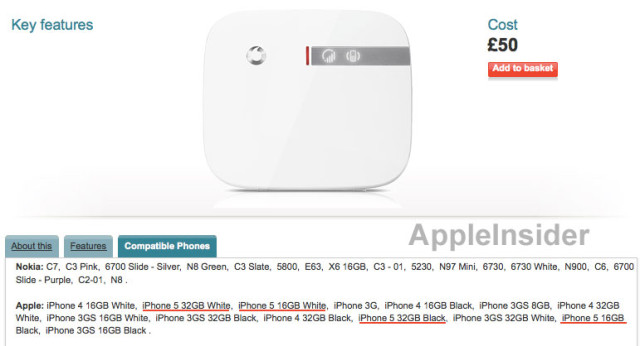 Of course, it’s possible that the listing is a typo, or even presumptive. But it does mention in addition the iPhone 4, iPhone 3GS and even the iPhone 3G first released in 2008. If accurate, the mention of a next-generation iPhone would mean that Apple’s handset would not gain a 64GB capacity model. Both the iPod touch and iPad have high-end models with 64GB of flash storage available, while the iPhone currently tops off at 32GB.

Looking at the same listing, we can also presume availability of a white colored iPhone 5 at launch unlike the iPhone 4 which took Apple almost a year to put up for sale.