Last night, Walter Isaacson sat down with Jon Stewart of The Daily Show to talk about his new book, “Steve Jobs”. 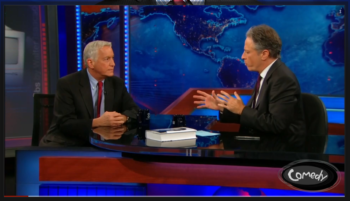 It’s an entertaining interview, touching on Jobs’s ‘Zen Stare’, the role of coincidence in the Apple co-founder’s life, and a dig at Microsoft: “One guy made the Zune, another guy made the iPod”.

The interview is mainly spoiler-free.