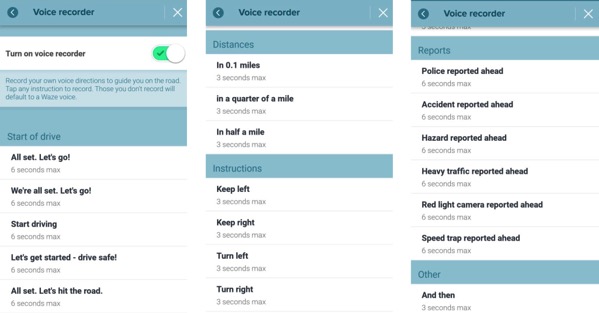 Back in May, Waze announced a new feature called the ‘Voice Recorder’, which allowed users to record custom voice prompts, including turn-by-turn directions, in their own voice. While the feature was initially made available for Android users, it has now been made available on iOS as well. The latest update to the Waze app for iOS adds Voice Recorder support, allowing users to make and share custom voice packs (via TechCrunch).

Sharing of custom voice packs isn’t just designed for fun – Waze is working with high-profile YouTube Creators to help them create their own voice packs for distribution to fans. It’s easy enough for everyone to share, however; you can publish your own voice recordings via an easily sendable link.

The new feature lets you follow in the footsteps of Waze voice greats like Morgan Freeman, Keith Morrison, and recently added Mr. T and Pixar’s Cars 3 stars Lightning McQueen and Jackson Storm. To get started, simply head over to the app’s settings and locate Sound & Voice > Voice Recorder.

You can grab the latest version of Waze using the following App Store link: