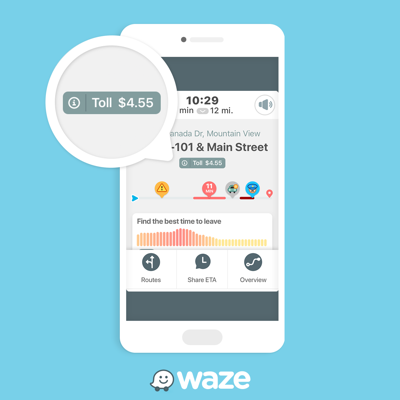 Waze has today started rolling out a new Toll Pricing feature for its users across Canada and the U.S. that shows estimated costs of each route in order to help users better plan their drives. The feature will show prices for toll roads, toll bridges, toll tunnels, and ferries.

“I’ve been a Waze map editor for three years now and working on this feature has been the most complex so far,” says map editor John. “We are using an entirely new tool that Waze engineers created for entering toll road information – where we input a large amount of data, from the pricing for different types of toll road passes to the entrance and exit points for toll roads.”

While Waze has always known where the toll roads are and allowed drivers to avoid them, the app will now list every toll’s actual price. The Toll Pricing feature will work in the US and Canada on both iOS and Android.

The new feature will certainly come in handy for Canadians traveling to the U.S., especially at border crossings such as the Detroit-Windsor Tunnel or the Seaway International Bridge, as well as on the country’s 8,000 kilometers of toll roads.

You can grab the latest version of Waze using the following App Store link.