“ChatGPT is optimized for dialogue,” explains OpenAI, which was co-founded by Elon Musk, Sam Altman, and others in 2016.

By focusing on a dialogue-based format, OpenAI has massively reduced the barrier of entry for an immensely powerful tool. Anyone can talk to ChatGPT like they would a butler or a friend (albeit a friend with a ridiculous amount of knowledge).

In ChatGPT’s own words:

I am Assistant, a large language model trained by OpenAI. I am not a physical entity, I exist only as a software program. My purpose is to assist people by generating text based on the inputs that I receive. I can provide information on a wide range of topics and help answer questions, but I am not able to browse the internet or access any information that is not part of my pre-existing knowledge. 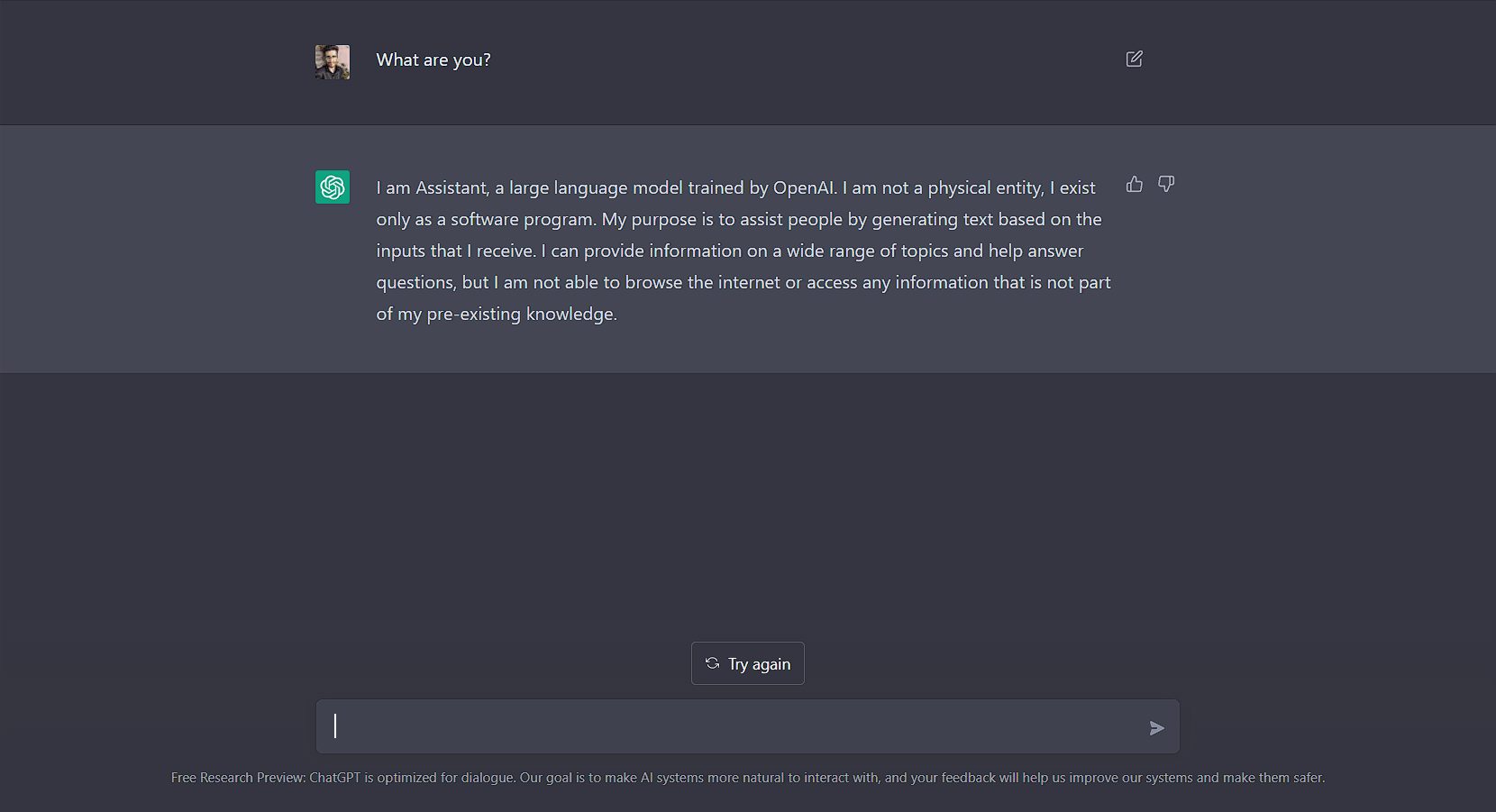 According to OpenAI, ChatGPT is not only able to respond to queries but also “answer followup questions, admit its mistakes, challenge incorrect premises, and reject inappropriate requests.”

What’s more, ChatGPT is able to recognize and create computer code in essentially any language. The chatbot can help you write and debug code, and even create entire scripts. Some users have even had success getting it to recognize — and write in — proprietary coding languages.

Users have also found that the tool is excellent with storytelling. You can get ChatGPT to concoct and play an entire text-based adventure game with a compelling narrative and have fantastical conversations with it. It can even write you ballads — or college essays, although some of these things might require some coaxing.

Here’s how you can try out ChatGPT for yourself:

Instead of one-off inputs and responses, ChatGPT features a conversational, thread-like structure. While each ChatGPT thread is self-contained, the chatbot can build on things that you or it have already said.

This means you can reference things you said in any of your previous messages, and ChatGPT will know what you’re talking about. If you want to go back to square one with the bot, simply press the Reset Thread button.

The same input won’t always result in the same output, and responses may be influenced by information in previous messages. You can press the Try Again button to have ChatGPT process the same input again. Users can also get the chatbot to improve one response with subsequent queries.

According to OpenAI co-founder and CEO Sam Altman, more than a million users have already tried out ChatGPT less than a week after it became available. Some users have even been able to get the chatbot to write research essays with citations, although the sources it cited were fictitious (but admittedly legit-looking).

ChatGPT has several limiters and filters built into it to prevent it from going off the rails, but some of the softer ones can be bypassed through conversation and trial and error. The chatbot was trained on a dataset that only went up to 2021, so it has no information on anything more recent.

AI has been a key area of focus for research and development efforts in recent years, powering everything from Siri on your iPhone and driver assistance technologies like Tesla’s Autopilot to electricity usage optimization in data centres.

While ChatGPT isn’t going to be putting people out of jobs just yet, it’s certainly at the level where it can help with more mundane tasks. It has tons of potential applications, from content creation to powering advanced customer support.

To top it all off, it can do all of that without even being able to browse the internet. Just think of what ChatGPT will be capable of once it can crawl the internet and draw from a global web of information in real time.

ChatGPT is undeniably a breakthrough — of what proportions, though, only time will tell. Have you tried ChatGPT yet? Let us know what you think in the comments below.

Users who have updated their Macs to last month's macOS 13.2 release are reporting that their Pioneer CD/DVD drives are no longer working (via MacRumors). Apparently, the latest version of macOS Ventura is not compatible with Pioneer's lineup of USB-connected CD, DVD, and Blu-ray drives for the Mac. Apple rolled out macOS 13.2 with support for...
Usman Qureshi
20 mins ago

Orbital Knight’s Castle Crumble has just arrived on the Apple Arcade, allowing you to embark on an adventure and conquer a variety of kingdoms. In Castle Crumble your goal is clear - castles must fall. You play to become a hero in far fantasylands. 🏰 New Release 🏰 Castles. Must. Fall. In Castle Crumble from @orbital_knight, you'll...
Usman Qureshi
33 mins ago

The folks over at YouTube channel Max Tech have today shared a comparison video of the 2023 M2 Max 16-inch MacBook Pro and the MSI Z16 PC laptop. In an earlier comparison, the new M2 MacBook Pro was pitted against the M1 Max MacBook Pro, in which they highlighted the High Power Mode on the 16-inch MacBooks. The High-Power Mode...
Usman Qureshi
42 mins ago