WhatsApp announced this afternoon their active user base reached 1 billion people, with founder Jan Koum stating he “couldn’t be more proud of our small team doing so much in just seven years.”

According to a graphic shared by Koum, WhatsApp users send 42 billion messages per day, share 1.6 billion photos daily, along with 250 million videos daily. 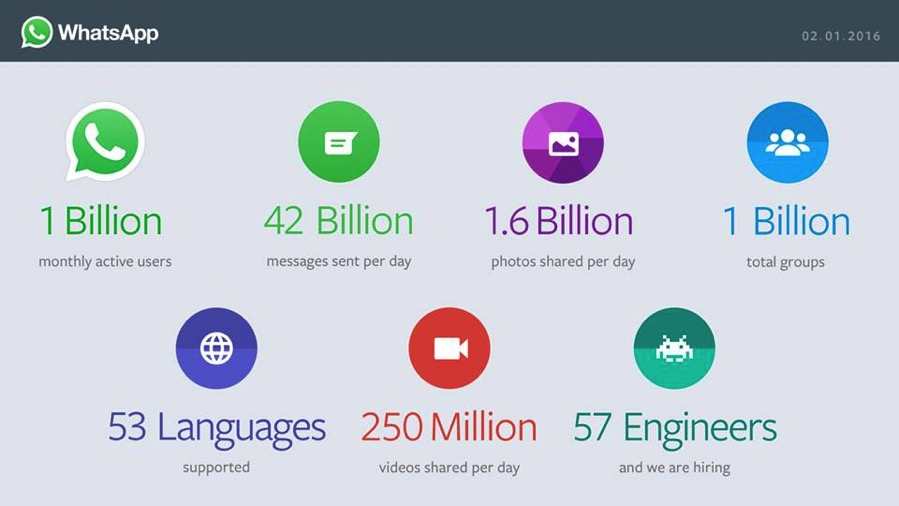 The company announced on its blog their original goal remains true: to allow people to keep in touch no matter where they are:

WhatsApp began as a simple idea: ensuring that anyone could stay in touch with family and friends anywhere on the planet, without costs or gimmicks standing in the way.

Facebook founder Mark Zuckerberg announced since the social network acquired WhatsApp, their user base has “more than doubled since joining”.

As for the next big thing for WhatsApp, Facebook says they’ll be working on connecting more people around the world and to also communicate with businesses. Zuckerberg continued to say “There are only a few services that connect more than a billion people. This milestone is an important step towards connecting the entire world.”

Last month, WhatsApp dropped their $1 annual subscription fee, and went completely free. The company has 1 billion users, but the question remains: how and when will WhatsApp start making money?