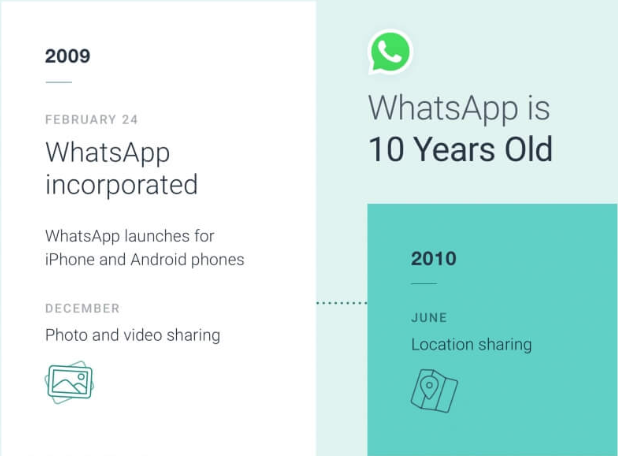 Cross platform messaging application, WhatsApp, is celebrating its 10 year anniversary today. Here’s what the Facebook-owned company said on its company blog this morning:

It’s been 10 years since we started WhatsApp! Over the past decade, we’ve heard from people across the globe who are using WhatsApp to stay in touch with their loved ones, connect with their communities, and build businesses. These stories continue to inspire us, and to celebrate this milestone, we’re looking back at some of our biggest moments over the years.

WhatsApp shared a video highlighting how their app has helped millions around the world:

Here’s a timeline of highlights from the past 10 years of WhatsApp:

The company concludes, “We’re excited to continue building features that make WhatsApp even more simple and reliable for everyone. Thank you to all of our users around the world for coming with us on this journey!”

Last April, WhatsApp co-founder Jan Koum announced he was leaving the company, in what was being described as a reported privacy clash with Facebook.

If you have friends using an Android smartphone, WhatsApp is one of the better ways to keep a conversation going, especially large group chats (an area Apple’s iMessage needs to improve on).