Some big news out of WhatsApp, as co-founder Jan Koum has announced (on Facebook of course) he is leaving the company, confirming earlier news reports of his departure. He confirmed the news on Facebook in an ’emotional’ post, detailing why he was leaving. Facebook acquired his popular messaging app for $16 billion in 2014. 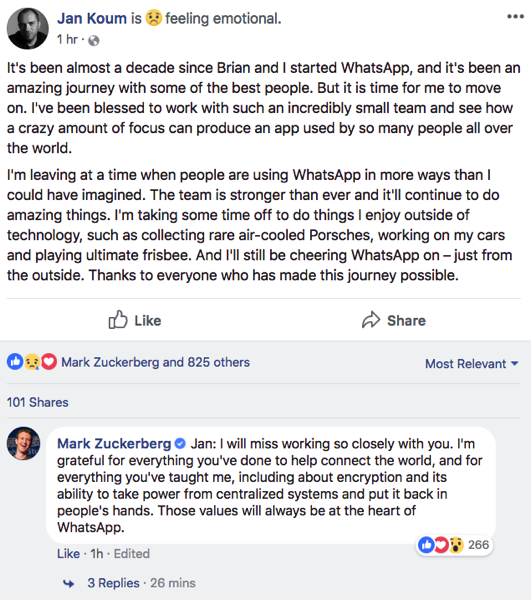 According to Koum, he says “it’s time for me to move on” and reiterates the app is in good hands:

It’s been almost a decade since Brian and I started WhatsApp, and it’s been an amazing journey with some of the best people. But it is time for me to move on. I’ve been blessed to work with such an incredibly small team and see how a crazy amount of focus can produce an app used by so many people all over the world.

I’m leaving at a time when people are using WhatsApp in more ways than I could have imagined. The team is stronger than ever and it’ll continue to do amazing things. I’m taking some time off to do things I enjoy outside of technology, such as collecting rare air-cooled Porsches, working on my cars and playing ultimate frisbee. And I’ll still be cheering WhatsApp on – just from the outside. Thanks to everyone who has made this journey possible.

Jan: I will miss working so closely with you. I’m grateful for everything you’ve done to help connect the world, and for everything you’ve taught me, including about encryption and its ability to take power from centralized systems and put it back in people’s hands. Those values will always be at the heart of WhatsApp.

Ultimately, Koum was worn down by the differences in approach, the people said. Other WhatsApp employees are demoralized and plan to to leave in November, four years and a month after the Facebook acquisition, when they are allowed to exercise all their stock options under the terms of the Facebook deal, according to the people.

According to the Washington Post, Koum’s departed is “over the popular messaging service’s strategy and Facebook’s attempts to use its personal data and weaken its encryption, according to people familiar with internal discussions.”

In late 2016, WhatsApp announced it would begin sharing user numbers and more with Facebook, despite vows by Koum to protect the private data of the messaging app’s users.

After the Facebook scandal with Cambridge Analytica came to light—where some 622,000 Canadians may be affected—Koum’s co-founder partner, Brian Acton tweeted “It is time” to delete Facebook, singling a possible clash of opinions over privacy and user data.

It’ll be interesting to see what happens to the future of WhatsApp, now that Koum is departing. We have used their app since day one and at one point, helped troubleshoot an issue for Rogers customers with Koum, in 2010.