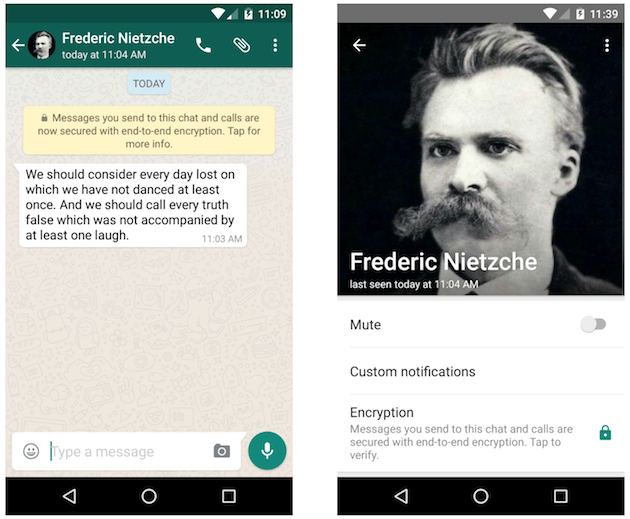 WhatsApp has today announced the completion of a technological development that makes the app more secure than ever before. Starting today, every single message, file, photo, video and voice message you send via WhatsApp will be end-to-end encrypted by default. WhatsApp partnered with Open Whisper Systems over a year ago to integrate the Signal Protocol into its product and today, that integration has been completed.

“As of today, the integration is fully complete. Users running the most recent versions of WhatsApp on any platform now get full end to end encryption for every message they send and every WhatsApp call they make when communicating with each other. This includes all the benefits of the Signal Protocol — a modern, open source, forward secure, strong encryption protocol for asynchronous messaging systems, designed to make end-to-end encrypted messaging as seamless as possible”.

The company explains on its blog that when you send a message, the only person who can read it is the person or group chat that you send that message to. No one else including cybercriminals, hackers or government agencies, can see inside that message. Even the company itself can’t see the encrypted messages. “End-to-end encryption helps make communication via WhatsApp private – sort of like a face-to-face conversation”.

The adoption and popularity of cloud gaming on mobile devices are continuously on the rise. With higher demand for pristine control over beloved games, the need for functional and intuitive controllers is also emerging. Turtle Beach is amongst the latest to bring a solution to the table with its Atom and Recon Cloud controllers. The...
Steve Vegvari
39 mins ago

The Federal Trade Commission (FTC) is said to be moving forward on filing an antitrust suit in order to block Microsoft's substantial acquisition of Activision Blizzard. News of this comes as Microsoft awaits approval from UK regulators. According to three people familiar with the matter, the FTC is “likely to file an antitrust lawsuit to...
Steve Vegvari
52 mins ago