WhatsApp has been spotted developing new apps for Windows and macOS users. 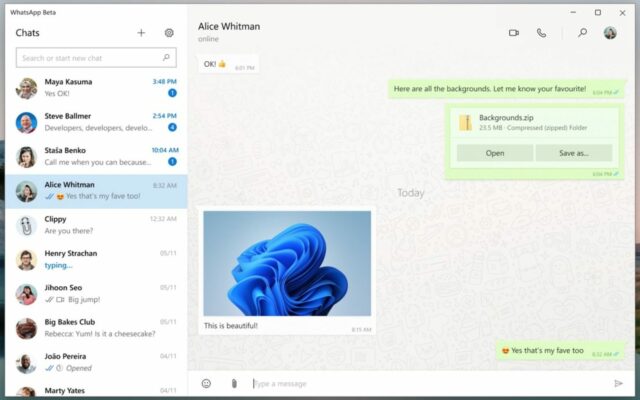 WhatsApp seems to be doubling down on its efforts to improve the chat app experience across platforms. After working on its multi-device feature as part of its linked device option, the Meta-owned firm is now reportedly developing dedicated apps for various platforms, including macOS and the Universal Windows Platform or UWP.

According to a new report from WABetaInfo, the new apps are found to have user interface (UI) improvements over existing WhatsApp desktop versions.

The WhatsApp desktop app can be seen in action on a Windows 11 platform in an image shared by Twitter user ALumia_Italia. The image shows a refreshed and much cleaner interface for WhatsApp on Windows 11. This comes with simpler icons and placement of features from what is seen on the web version of WhatsApp for desktops.

The chat section on the left, for instance, comes with fewer options than the ones on WhatsApp Web. this keeps the app centred and very very simple to look at and operate. The chat window is more or less the same, though there is one major difference. As seen in the preview image of the UWP WhatsApp, the new app will allow users to make voice and video calls right through their computers.

While WhatsApp is one of the best iPhone apps for instant messaging, its lack of an iPad app is still a real downside. That’s clearly something that will be fixed eventually, and using that app as the basis for a Mac app should help in terms of development time within WhatsApp, too.