SensorTower has today shared its Q1 2019 rankings of the 10 most downloaded apps in the world, with Facebook-owned WhatsApp messaging app topping the list with more than 223 million new installs during the quarter. 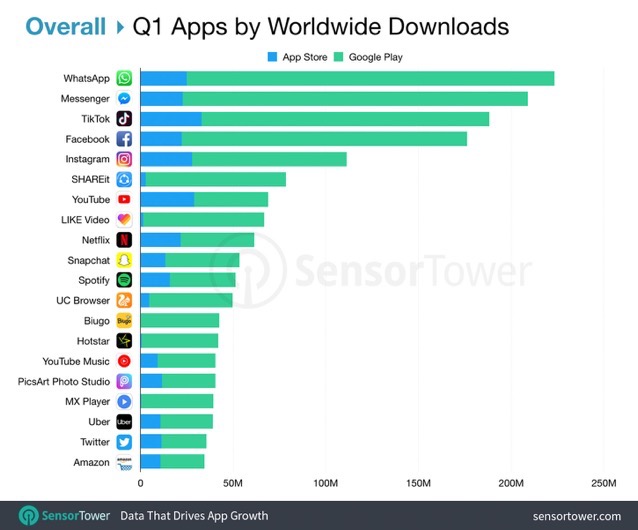 According to SensorTower’s Q1 2019 Data Digest Report, the top 10 apps were the same as the previous quarter with the top five all retaining their rankings from Q4 2018. Facebook once again had four of the top five apps, while video editing app Biugo and photo editing app PicsArt entering the top 20 apps worldwide for the first time in Q1 2019.

With Facebook Messenger becoming the second most downloaded app in the world with close to 209 million new installs in Q1 2019, TikTok, Facebook, and Instagram rounded out the top 5 spots on the list. TikTok was also the most downloaded app on the App Store worldwide for Q1 2019:

WhatsApp was the most downloaded app on Google Play worldwide for Q1 2019 with close to 199 million installs, followed by Messenger, TikTok, Facebook, and Instagram.

You can get additional Q1 2019 insights by downloading the full report at this link.