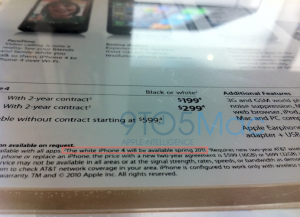 * Believe it if you will.

Thanks to our friends at 9to5Mac for “confirming” the arrival of the white iPhone 4 in Spring 2011. Apparently Apple store signage being distributed includes the verbiage ” The white iPhone 4 will be available spring 2011″. Yeah! Err…ummm, whatever.

Don’t get me wrong, I LOVE my iPhone 4 and perhaps had the white phone been available I might have picked that one over the black one. More likely no, but at least there might have been the option.

I guess what is ringing a bit hollow here for me are a few things:

I am soooooo tired about hearing about the white iPhone. It’s in New York, it’s cancelled, it’s being sold by a 17-year kid, it’s back on, it’s cancelled, my dog has it, it’s on the moon….ENOUGH!

Spring 2011 will likely mean late spring, so the white iPhone may hit the stores in May 2011. Won’t there be an announcement in probably June 2011 for the iPhone 5 anyway?

I think that white iPhone 4 is best put to bed once and for all. Have iPhone 5 ready to go with both colours in June 2011 and move from there. My 2 cents.