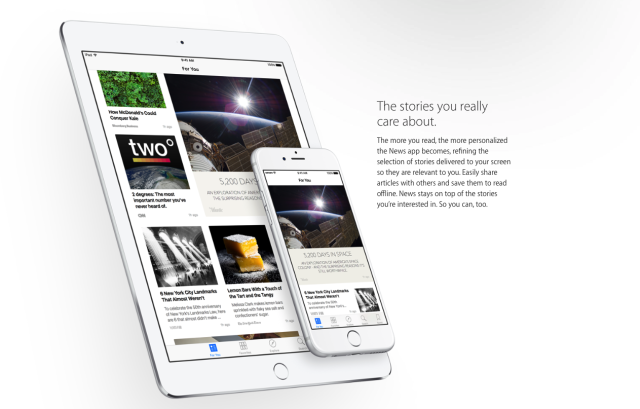 When iOS 9 launched this fall, it included a new Apple-made app: News. Six weeks after the release of the latest iOS, 40 million people had tried it out, according to Apple. CNN was curious to find out why Apple developed the News app, and who is a better person to talk about it than the company’s senior vice president of Internet software and services, Eddy Cue?

When asked why the News app is pre-installed, Cue said:

“We’ve only created the apps that we think everyone uses every day… We really wanted to create a single app that all customers could go to, to read all their news — no matter what they are interested in, no matter what topics, no matter what publications they want to follow — and get that experience that they’re used to with our products, where it looks beautiful, it’s really easy to read and yet it provides all the content available around the world.”

Apple provides two options to monetize content within the News app: one is the ads, and in this case, the content providers keep 100% of the revenue, and the second option is through Apple — the company sells ads for them, and in this case, it takes its usual 30% cut.

When asked about whether Apple will employ journalists directly, Cue denied such plans:

“It’s not in our plans at all. Again, we try to focus on what we do really well. We build technologies and we know how to do that really well. We think there are great journalists around the world and we want to empower those journalists to get their content right to the customer.”

You can read the full interview on CNN.com.