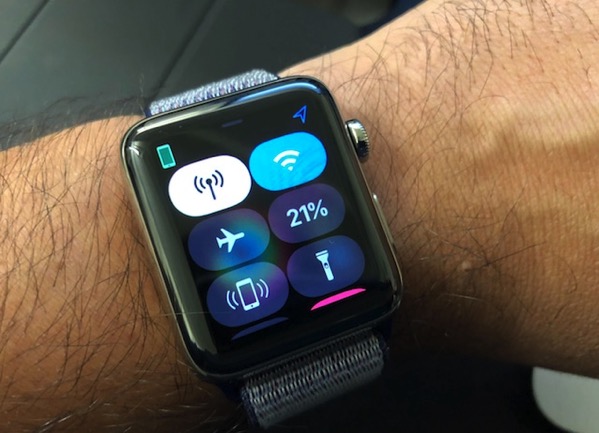 In addition to addressing Wi-Fi and cellular handoff issues, the upcoming WatchOS 4.1, which is expected to release at the end of the month, will also add a new blue button on Control Center to toggle Wi-Fi on Series 3 Apple Watches with LTE. As noted by CNET in WatchOS 4.1 preview, the toggle button lets you use cellular even when the watch is in range of a known Wi-Fi network.

“I’ve been using a preview of WatchOS 4.1, and I noticed the new blue Wi-Fi toggle button on my Apple Watch Series 3 with cellular. The toggle button is just for added control.

The Wi-Fi control button was absent in previous versions of WatchOS, but only cellular models of Apple Watch Series 3 will have the feature.”

It must however be noted that the Apple Watch still cannot select specific Wi-Fi networks, which means the toggle just deactivates Wi-Fi altogether. Also, when the watch comes back into contact with another known Wi-Fi network, the Wi-Fi will automatically toggle on again as it does in iOS 11, unless you forget the Wi-Fi network on your iPhone

The WatchOS 4.1 update will also bring music streaming over cellular and Wi-Fi via Apple Music and iCloud Music libraries, as well as a new streaming Radio app to Apple Watches.