The immediate answer right now is YES. Yesterday was the start of the wireless spectrum bidding in Canada. This moment will affect wireless customers in this country along many fronts. For starters, regardless of what companies emerge from the bidding, everyone will benefit from the increased competition. This means lower monthly plans, data rates, features, etc.

Thank the government for finally stepping in and realizing that this country’s wireless rates and handsets have been crippled due to the monopoly of the “Big 3” companies Rogers, Telus, and BCE.

Here are the major players within the wireless auction:

“The big winner is going to be the wireless user,” said Iain Grant, managing director for telecommunications consultancy SeaBoard Group. “Even now, incumbents have already begun to remove system access fees and long term contracts. With the Rogers iPhone launch, we’re also going to see a transformation of data pricing.”

Ahh, just what I wanted to hear! It’s nice to know something is being done about the System Access Fee (SAF) that we’ve been paying all these years (minus the Pay as you Go crowd).

The article also suggests to current cellphone users in Canada to refrain from signing long term contracts until the start of 2009. By that time, new companies will have had time to fully setup shop, enabling cheaper monthly plans and other goodies. 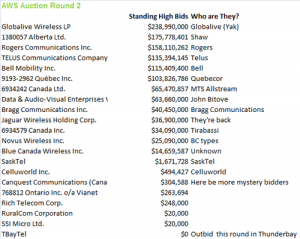 How Will This Affect iPhone Users in Canada?

Good question! For starters, increased competition has already put pressure on Rogers to lower data rates. We know from our “insider sources” that there will be in fact iPhone data plans coming out once the iPhone is released by Rogers. These plans will be cheaper than the current data plans, so we will have to wait to find out exact details.

I could see the following scenario happening here, as suggested by the industry analysts. Each company bidding in the auction could create a wireless extension for their home province, capturing local subscribers. We know Rogers has a stranglehold on GSM so we would need these new start ups to embrace GSM, rather than CDMA. New companies will be able to “roam” off Rogers’ GSM networks. So if all goes as planned we could see a new startup as soon as this fall.

Could we possibly see Shaw Communications creating a GSM rival in BC? They have mentioned they are not looking to create a wireless carrier, but possibly to sell the auction in the future. Maybe Manitoba Telecom and Quebecor Inc. could possibly do the same?

Regardless of what happens, expect lower plans and data rates. It’s been a long time coming and I can’t wait to see what to expect once the wireless auction bidding completes at the end of June. Once the 3G iPhone is announced at Apple’s WWDC on June 9th (we all know it’s bound to happen), it will be interesting to see what Rogers will offer in terms of iPhone voice plans and data rates (and if there will be more $20,000 phone bills in the future).

What do you predict will be the outcome of the wireless spectrum?