On Tuesday, Winnipeg city Councillor, Kevin Klein, tweeted “It was a long day l, but I’m as grateful today to serve Charleswood – Tuxedo – Westwood and all of #Winnipeg as I was on Election Day. Proudly working.” The tweet included a selfie of Klein behind the wheel.

Upon further inspection of the picture shared on Twitter, users zooming into the photo could see in the reflection in the Councillor’s sunglasses, his hand on his cellphone, which would be violating the province’s distracted driving laws. 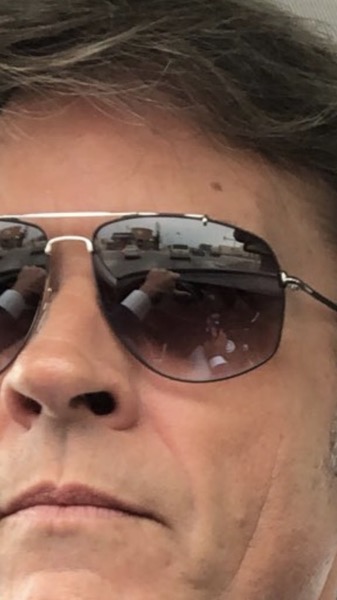 According to CBC News, Klein said he used a Siri voice command on his iPhone to take his photo.

It was a long day l, but I’m as grateful today to serve Charleswood – Tuxedo – Westwood and all of #Winnipeg as I was on Election Day. Proudly working #ForABetterWinnipeg #wpgpoli pic.twitter.com/WX9YqXQNJZ

“You can say, ‘Take the photo, Siri,’ whatever,” said Klein, adding “I know what the law is,” and “It was not dangerous. It would not be dangerous. It did not violate the law.”

Klein says his tweet was not sent out while he was driving and he has never been issued a distracted driving ticket. “You can turn it into what you’d like to turn it into. It was a very innocent voice command,” said the councillor.

You can ask Siri to take a photo, but only the Camera app will launch. User action is still required to tap the shutter icon for a photo to be taken. CBC News says it was unable to replicate Kleins claims (same here).

“You can turn it into what you’d like to turn it into. It was a very innocent voice command,” said Klein.

Winnipeg police told CBC News in an emailed statement, the councillor’s selfie actions behind the wheel constitute distracted driving, but they are not investigating.

“We do not investigate social media posts unless they constitute a crime [or] threat against an individual or an institution. Even then, we would require a complainant who could facilitate investigators being able to submit the post as evidence in court,” said Const. Rob Carver, to CBC News.

Klein also serves as the chair of the Winnipeg Police Board.

In this week's edition of his Power On newsletter, Bloomberg's Mark Gurman speculated that Apple could launch an even pricier iPhone model, positioned above the "Pro Max," as early as 2024. The renowned analyst previously reported that Apple could rename this year's iPhone 15 Pro Max the iPhone 15 "Ultra." However, he now believes the company is...
Nehal Malik
14 mins ago