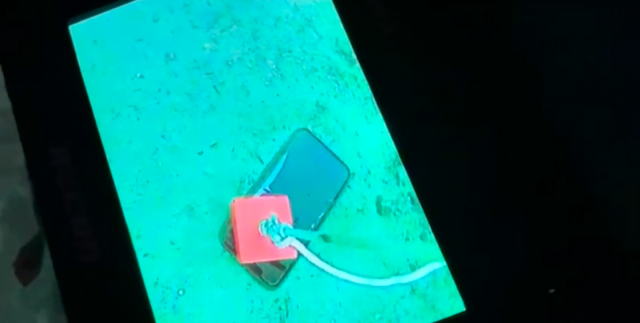 A woman based in Saskatoon lost her iPhone 11 while celebrating her 50th birthday at Waskesiu Lake. The iPhone was recovered 30 days after being plunged into the frozen water, and to the woman’s surprise, it still worked.

Angie Carriere of Saskatoon lost her iPhone to the Waskesiu waters on the day she was celebrating her birthday with friends and family. The situation began as she handed her phone to her daughter and told her to be careful with the device.

Speaking with CTV News, Carriere stated “About 10 minutes later, I have the phone on my knee, the tent blows up, I go to grab the tent and down it goes into the hole.”

Like many can relate, that initial shock of seeing an expensive electronic like an iPhone hit the water can take its toll. Carriere then looked into the fishing hole and through the clear water, she saw her iPhone sitting in the sand below. Without a means of recovering the device, Carriere chalked it up as a lost cause. Though, she was devastated as her device was not backed up.

Two weeks later, while on a third trip to Waskesiu Lake, Carriere and friends attempted to return to the spot where she has lost her phone. However, by that time, the area was covered in fresh snow. With a fish finder and a magnet attached to a fishing line, the group was finally able to recover the device.

“I didn’t put my phone in rice, I knew it didn’t work,” Carriere told CTV News. “The next morning for whatever reason, a little while later, was walking by and I saw the Apple symbol which was shocking at first, and then when I did the swipe up it went to the screen saver and I thought, ‘what on Earth?’”

Although there was some minor condensation on the camera, which went away after some time, the device worked as intended. This strange occurrence is rather unexplainable. Apple’s iPhone 11 has a water resistance rating of IP68, meaning that it can survive in up to 1.5 meters of water for roughly 90 minutes. The fact that the device survived in a frozen lake for a month is quite surviving.

When speaking with Regina tech expert Curtis Paradis, the expert stated: “There’s only so much and so long that those rubber gaskets can last. So 30 days in presumably freezing cold water, it’s interesting to see the phone can last that long.”

While Carriere’s phone survived, this was likely a circumstance of luck. For most, it’s probably for the best to not bank on a device surviving past the 90-minute mark.

Fresh off the heels of the launch of Apple's HomePod (2nd-Gen), TF International Securities' Apple analyst Ming-Chi Kuo believes a successor to the HomePod mini 2 could be on its way. In a tweet thread surrounding Apple supplier Goertek, Kuo discussed that the Weifang-based components company has "secured NPI and assembly orders" for the ‌HomePod mini‌...
Steve Vegvari
42 mins ago