Apple’s annual Worldwide Developers Conference (WWDC), usually takes place in the summer and this year, it appears to be taking place the week of June 13-17, according to Siri, as spotted by Benjamin Mayo from 9to5Mac. We were able to confirm Siri is answering the same, as seen below: 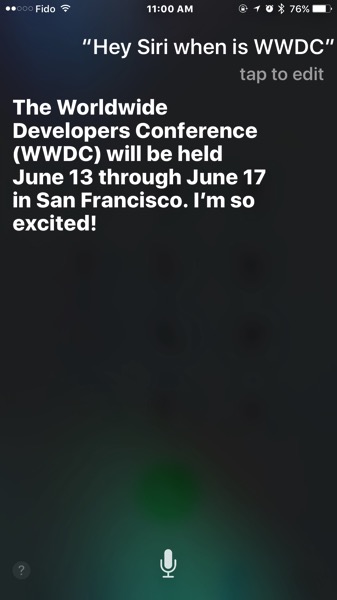 Three hours ago earlier this morning, when Mayo asked “When is WWDC?”, Siri responded “the next Worldwide Developers Conference (WWDC) hasn’t been announced yet. I can’t wait!” But now when asked the same question, Siri says WWDC will be held June 13-17 in San Francisco.

Back in January, these exact dates for WWDC were noted within the Moscone Center calendar, as the dates before and after the week in question were booked already, leaving the 13-17 as the only possible time for Apple’s event.

Last year, Apple announced WWDC for June 8-12, with tagline “The epicenter of change”, an announcement made to the media on April 14th. Should Apple confirm this year’s WWDC, expect it to be this week. Tickets for developers last year cost $1,599 USD, while there were also 350 WWDC Scholarships handed out to students.