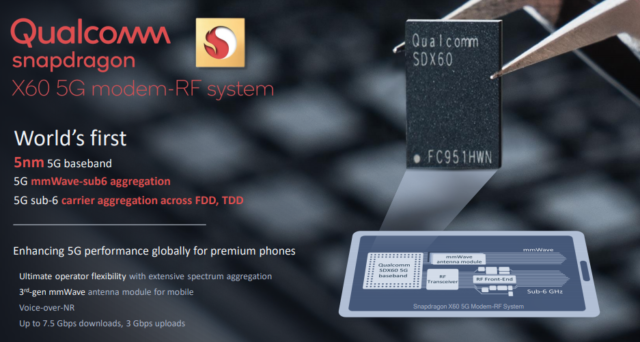 Qualcomm unveiled its third-generation 5G modem, Snapdragon X60, which will enable the next wave of premium phones to make considerably better use of 5G networks than earlier devices, reads a new report from AnandTech.

Qualcomm’s X50 kicked off 5G and the X55 is being used in the latest Samsung devices. The X60 is designed to scale 5G devices and allow carriers to be flexible with spectrum and optimize performance.

The modem uses process technology of 5 nanometers, resulting in lower power consumption and a smaller footprint for even sleeker devices. Like its predecessor, the X60 will run on everything from 2G to 5G networks, and it will access the slower but more reliable sub-6Ghz networks and the faster but spottier millimeter wave networks.

The X60 can reportedly deliver up to 7.5Gbps download speeds and 3Gbps upload speeds, far greater than even the theoretical capabilities of the current 5G networks being built.

Along with being built on a 5nm process — while the Snapdragon X55 was 7nm — Qualcomm introduced the smaller QTM535 mmWave antenna module. This is also important to the evolution of 5G, because a smaller antenna means that it can fit into thinner and sleeker form factors.

The big focus with the Snapdragon X60 is continued development of 5G, helping carriers move from non-standalone to standalone 5G. Like the X55, it uses Dynamic Spectrum Sharing to make use of both 4G LTE and 5G, but eventually, the world is going to move to the latter.

It’s no secret that Apple will be jumping on board the 5G train with the upcoming iPhone 12, but what isn’t so certain is which modem it will be using. Apple and Qualcomm entered into a multi-year agreement to supply chips for the iPhone, which everyone assumes will include a 5G modem, especially since Qualcomm is basically the only game in town.

SpaceX has applied for the U.S. Federal Communications Commission (FCC)'s permission to equip 2,016 second-generation Starlink satellites with equipment that will provide T-Mobile customers with cellular connectivity when ground coverage is unavailable (via Tesla North). Back in August, SpaceX and T-Mobile announced a partnership to provide global satellite phone service, powered by second-gen Starlink satellites...
Nehal Malik
36 mins ago