Microsoft has just revealed a big list of games coming to Xbox Game Pass in August 2021, featuring some dead gods, some not-so-dead gods, driving and skating, and more. This month’s lineup includes Hades, Skate, Curse of the Dead Gods, and Lumines Remastered, among others. 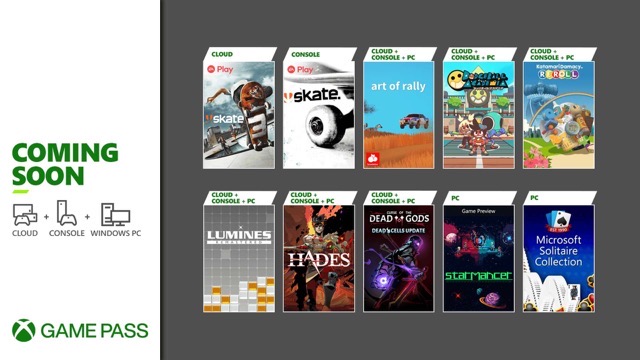 Curse of the Dead Gods (Cloud, Console, and PC) – August 5

Your greed will lead you to death, but that is not an escape. Rise to fight again and defy the malignant deities that linger in this place!

Get ready to dodge, duck, dip, and dive in Dodgeball Academia available with Xbox Game Pass on day one! This vibrant sports RPG puts you in a world that lives and breathes dodgeball.

The stop-at-nothing pushing prince is back and ready to reroll! When the King of All Cosmos accidentally destroys all the stars in the sky, he orders you, his pint-sized princely son, to put the twinkle back in the heavens above.

A game that beautifully marries the elements of sound, light and puzzle-action into one engaging, yet easy-to-play experience. You’re at the center of the high-energy, block-dropping action while you groove to awesome house, trance, and techno beats!

Head back to where it all began as Skate joins The EA Play List! Get chased by security guards, impress or annoy citizens, ride with pros, discover skate shops, and make spots your own in this fully reactive city!

The award-winning Skate franchise returns to break new ground with Skate 3. Build the ultimate team and change the face of the city in this definitive co-op skateboarding experience with EA Play.

Obey protocol or go rogue as you take on the role of a powerful A.I. in Starmancer. Build bustling space ports, secret laboratories, and incubators for mysterious eggs. Defend against starvation, sabotage, and space zombies. Don’t worry, you can always grow more humans.

From beginner-friendly options to driving modes that’ll challenge the most expert drivers, race across the world through colorful and stylized environments, now including Kenya with 4 new cars, 6 new tracks, and a new free-roam area!

You’ll wield the powers and mythic weapons of Olympus, while growing stronger and unraveling more of the story with each unique escape attempt.

Be part of the most played video game in history! Get an ad-free experience in the Premium Edition, including an exclusive Xbox Game Pass card back