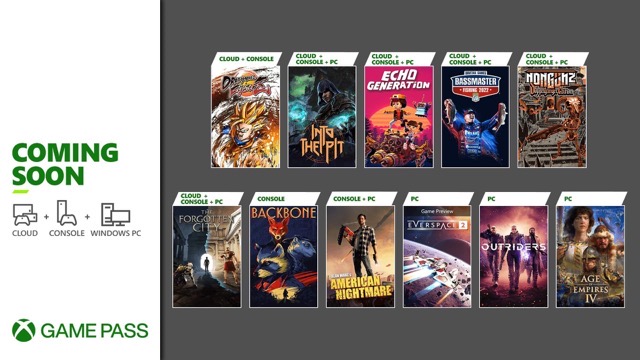 Experience epic fights, destructible stages, and famous events ripped from the Dragon Ball anime. Create your team from a huge cast of your favorite characters and battle it out in epic 3v3 fights.

Available day one with Xbox Game Pass: Spooky mysteries abound as you lead your ragtag gang to take on monsters and mechs to save your hometown. Unlock unique skills for your party through comic books and prepare for active turn-based battles and boss fights that will keep you on your toes.

Everspace 2 is a fast-paced, single-player spaceship shooter featuring meaningful exploration in space and on planets, tons of loot, RPG elements, mining, and crafting. Follow its predecessor’s events and experience the continuation of a thoughtful sci-fi story.

Available day one with Xbox Game Pass: One of the most beloved real-time strategy games returns to glory with Age of Empires IV, putting you at the center of epic historical battles that shaped the world. Featuring both familiar and innovative new ways to expand your empire in vast landscapes with stunning 4K visual fidelity, Age of Empires IV brings an evolved real-time strategy game to a new generation.

In this standalone experience, Alan Wake fights the herald of darkness, the evil Mr. Scratch! A thrilling storyline, hordes of creepy enemies, serious firepower, and beautiful Arizona locations, combined with a fun and challenging new game mode make this a must for Alan Wake veterans, and the perfect jumping off point for new players!

Raccoon detective Howard Lotor is not a hero. He can barely make rent. And yet he has stumbled across something so massive that it will shake the very fabric of society. Stunning visuals, an evocative soundtrack, and a daring narrative bring a dystopian Vancouver, BC inhabited by animals to life in this highly anticipated, post-noir adventure.

Available on day one with Xbox Game Pass: Experience the thrill of competitive bass fishing in Bassmaster Fishing 2022! Compete as 10 Elite Series anglers, such as cover star Scott Martin, back-to-back Bassmaster Classic Champion Hank Cherry, or create your own angler to achieve angling immortality by winning the coveted Bassmaster Classic.

A nihilistic action platformer roguelike. Obscure in both gameplay and theme, Nongunz is a riddle that demands sacrifice. Each run sees you parting from a black and white graveyard into an ever-changing gothic dungeon full of nightmares fleshed out of human viscera. Surviving not only requires skill but style.

Travel 2,000 years into the past and relive the final days of a cursed Roman city, where if one person sins, everyone dies. Only by questioning an intertwined community of colorful characters, cleverly exploiting the time loop, and making difficult moral choices can you hope to solve this epic mystery.