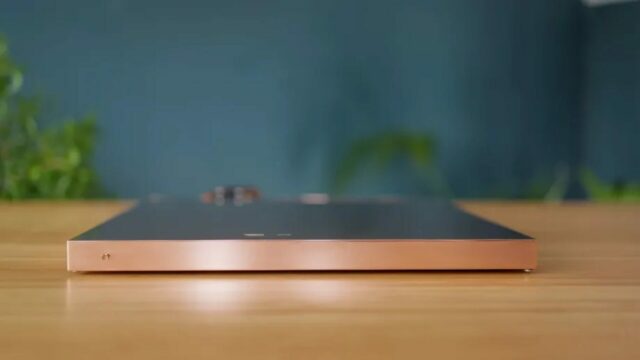 Sony’s PlayStation 5 is one of the most unique consoles to hit the market simply due to its design. While being a powerhouse under the hood, the PlayStation 5 is large in comparison to other more modern consoles. A DIY YouTube content creator has built a working PlayStation 5 “Slim” that cuts down the real estate.

Matt Perks took to his YouTube channel DIY Perks to show off the build of the PlayStation 5 Slim. As first seen by The Verge, Perks’ design reduces the footprint of the PlayStation 5 by nearly four times. However, building the working device appears to have been no easy task.

The housing unit Perks is utilizing is a slim copper console. Here, all the main components needed for the PlayStation 5 to run are stored. To help with cutting down on the size of the housing unit, Perks fixed an external power supply and cooling solution. Both are hidden so the console unit itself stores other required components and memory.

The cooling system Perks designed is a custom water cooling setup. It utilizes copper sheeting to channel water over the CPU. The system also houses thermal bridges to help keep other necessary components cool such as the SSD and power circuits. As for power, Perks created an external power supply.

As Perks explains, there was a lot of trial and error involved. At first, the external cooling and power supply fried the PlayStation 5 after the unit fell over and blocked airflow.

However, Perks was delighted to state that his custom cooling actually resulted in improved temperatures. Perks found substantial improvements in RAM and VRM temperatures. In fact, with the use of a bigger cooling unit, these temperatures could be improved even more.

While Perks’ process is something very few players will be able to replicate, the video is still incredibly insightful. Plus, it’s a hopeful look at what Sony may bring to the table one day with an official PlayStation 5 slim.