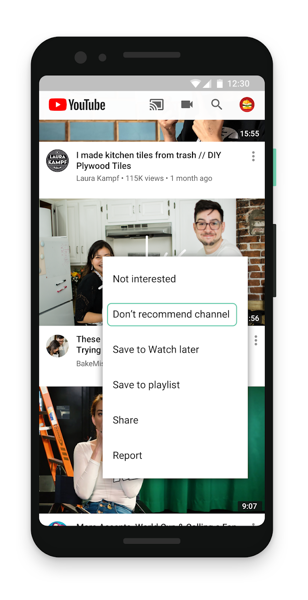 A set of new features rolling out today on YouTube for iOS and Android are making it easier for users to control their suggested content, including the ability to hide channels from their recommendations. According to Engadget, users will be able to control precisely which video suggestions appear in their homepage and Up Next suggestions.

YouTube admits that it doesn’t always get its suggestions right, so it will let users remove suggested channels that they don’t want to watch. You’ll be able to click the three-dot menu next to a video and select “don’t recommend channel.”
YouTube will also clue users into why they’re seeing a particular video suggestion — like because they viewed similar content in the past or other viewers with similar interests have liked it.

Additionally, YouTube is also going to make it simpler for users to find the content they want. Users will be able to select categories related to their interests when they scroll up on their Homepage or Up Next. Google says the aim is to assist users in finding what they’re looking for even faster.

The new feature will arrive on YouTube for desktop in the near future as well.