Google has today announced that it is bringing a completely new homepage experience to its YouTube mobile users. Starting today, when you open the YouTube app on your iPhone, you’ll experience an all new Home with a clean and simple format, consisting of a single feed of recommended videos that are all presented with large thumbnails (via TechCrunch). 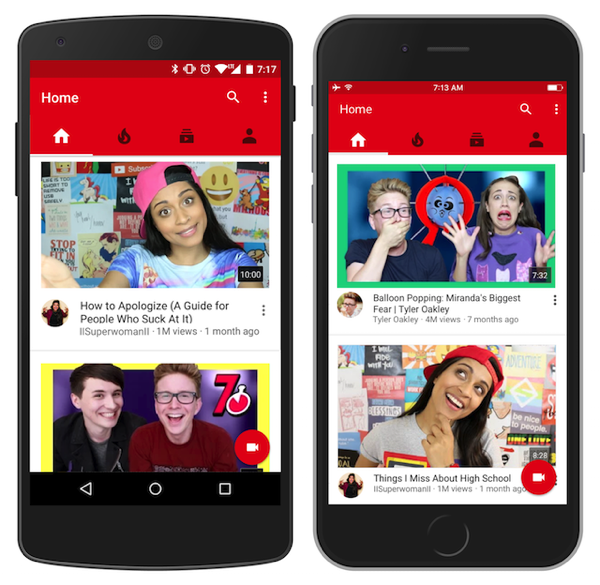 According to YouTube’s VP of product management Johanna Wright, Google’s improved recommendations algorithm which uses deep neural networks at its core, is now also able to recommend fresher content on YouTube, that has been uploaded within the last hour. “We have made so many changes and we are getting so much better that we can now remove the grouping,” Wright said, continuing that experiments have shown that users really like this design. “We want YouTube to communicate this feeling that it understands you”.

“This isn’t just a new coat of paint on the same old Home—we’ve coupled a fresh design with more relevant personalized recommendations that make it easier to discover videos you’ll be excited to watch. The new recommendation system is based on deep neural network technology, which means it can find patterns automatically and keep learning and improving as it goes. Every day, we recommend hundreds of millions of different videos on Home, billions of times, in 76 languages. One of the biggest improvements is how the system suggests more recent videos and those from the creators you love”.

Let us know how you like the new YouTube home in the comments section. Meanwhile, check out the following video to learn how machine learning and deep neural networks work:

Following Morgan Stanley's estimate that Apple’s App store net revenue tumbled a record 5% last month, CNBC's Jim Cramer has said that investors should ignore negative calls about the iPhone maker and hold onto their shares. “The next time you hear this Apple mishegoss, you need to recognize that you’re still getting one more buying opportunity in...
Usman Qureshi
7 mins ago