Money spent on the YouTube app ranked third of all apps globally as of October 17, 2021 on iOS.

According to a new report from App Annie, the livestreaming boom is driving a significant uptick in the creator economy, with consumer spend on the app surpassing $3 billion USD to date.

Demand for content has grown steadily over the last decade, and accelerated during the pandemic as consumers turned to apps for watching and streaming content. In the most recent months, YouTube ranked #3 among all non-gaming apps by global lifetime consumer spend as of October 2021 — just from their iOS revenue. As the world saw a shift in day-to-day routines, consumers spent an increased amount of time video and music streaming.

Initially, much of the live stream economy was based on one-off purchases like sticker packs, but today, consumers are gifting content creators directly during their livestreams. 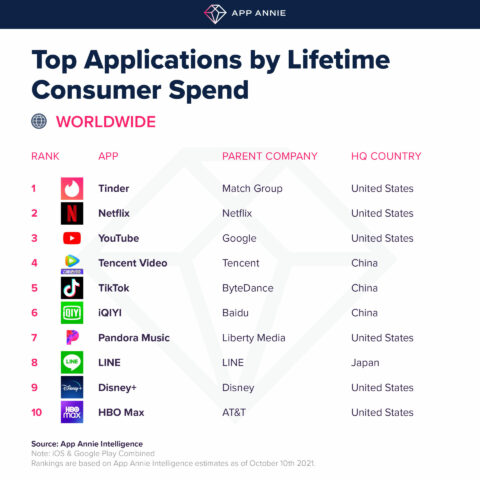 Apps that offer live streaming as a prominent feature are also those that are driving the majority of today’s social app spending, the report says. In the first half of this year, $3 USD out every $4 spent in the top 25 social apps came from apps that offered livestreams, for example.

“It is notable that YouTube is also not only the #3 application overall by global app store consumer spend of all time, but also #1 live streaming app by spend (combined on iOS and Google Play as of October 10, 2021),” reads the report.

Consumer spending on apps is growing at unprecedented speed. As of Q1 2021, app spend is up 40 percent year over year, which is further evidence of the impact the pandemic continues to have on the app market.