Zoom Rolls Out End-to-End Encryption on Mobile and Desktop

Zoom is rolling out end-to-end encryption for all video meetings on mobile and desktop devices after criticism that it used “substandard” encryption. 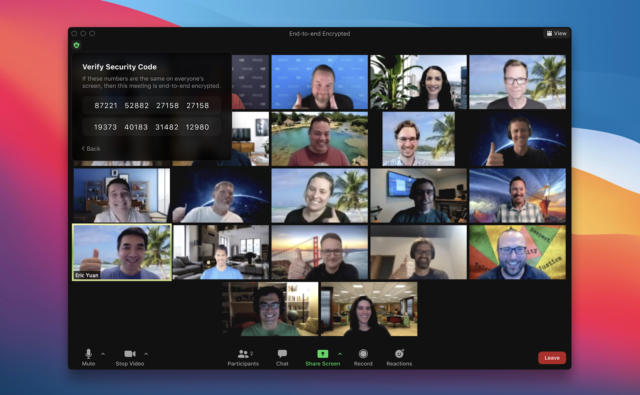 On Tuesday, Zoom announced that end-to-end encryption (E2EE) is immediately available for users on Windows, macOS, and Android. The iOS version of the Zoom app is still awaiting approval from Apple’s App Store review. It’s being rolled out as a “technical preview” for 30 days, during which time Zoom aims to gather customer feedback about their experience with E2EE.

“We’re very proud to bring Zoom’s new end-to-end encryption to Zoom users globally today,” Zoom CISO Jason Lee said. “This has been a highly requested feature from our customers, and we’re excited to make this a reality. Kudos to our encryption team who joined us from Keybase in May and developed this impressive security feature within just six months.”

But it’s not all good news as the feature is launching with a number of limitations. For example, turning on E2EE will prevent you from using cloud recording, streaming, live transcription, Breakout Rooms, polling, 1:1 private chat, and meeting reactions. The plan is to gradually integrate these elements during 2021.

Zoom announced the upgrade a couple of weeks ago, but said it was live as of Monday for Windows, macOS and Android users. Approval for the feature on iOS was awaiting approval from Apple’s App Store, Zoom said. It’s a classic case of a tech company acquiring the resources it needed rather than developing entirely them in-house.

The upgrade was more than just a “highly requested feature,” of course. Security experts, civil liberties groups, child safety advocates and other organizations have been pressuring Zoom for much of 2020 to improve the security of the app, given the explosion in telework that came after businesses and schools closed their buildings in response to the coronavirus pandemic.