Apple launches sales of its new Apple Watch Series 4 in late September. We’ve been spending some time with the latest Apple Watch since then, so here’s our quick review of this wearable (less than 1000,000 words), and whether it’s worth an upgrade from an older model. 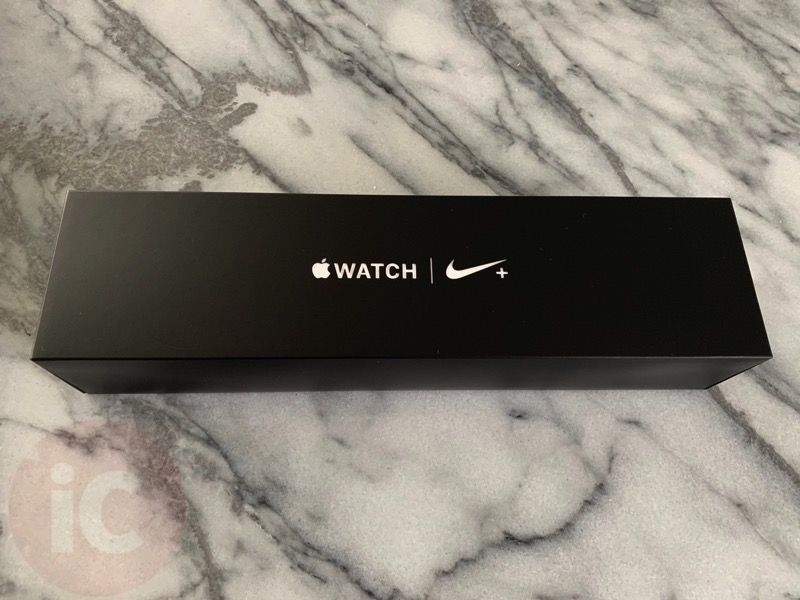 Last year, when the Series 3 launched, we didn’t see any need to upgrade from our existing 42mm Nike+ Series 2. With no major design changes in the Series 3, aside from a speed bump, coupled with the fact we rarely used any watchOS apps at all, meant it wasn’t exactly worth our time. Are we seriously going to upgrade our watches annually now, too?

But with Apple Watch Series 4, larger displays are now here, and the 44mm Nike+ in Space Grey Aluminium with Anthracite/Black Sport Band ended up being our watch of choice.

We originally opted for a 44mm Space Grey Aluminium Case with Black Sport Loop, but I ended up returning it, because I didn’t like the black Sport Loop and its nylon weave with hints of colour. The nylon took too long to dry after showers, which mean for an uncomfortable band when wet. But when dry, the band does offer a tight and snug fit, every time.

This year’s Apple Watch Series 4 unboxing is different than years’ past, as after you take off the plastic wrap, boxes for the watch and band are wrapped in an origami-like enclosure. 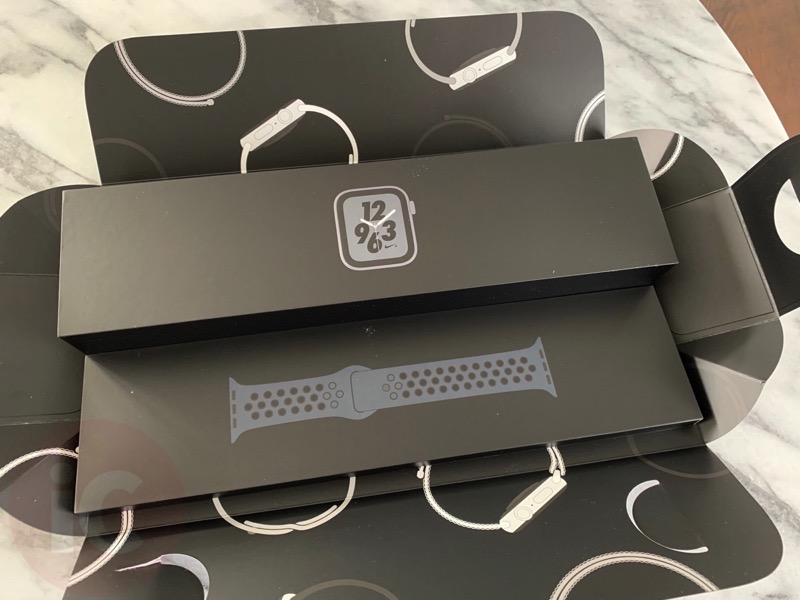 This time around, the band comes in its own box instead of being attached to your Apple Watch, while the latter now sits alone in a felt sleeve, alongside the charging cable and AC adapter: 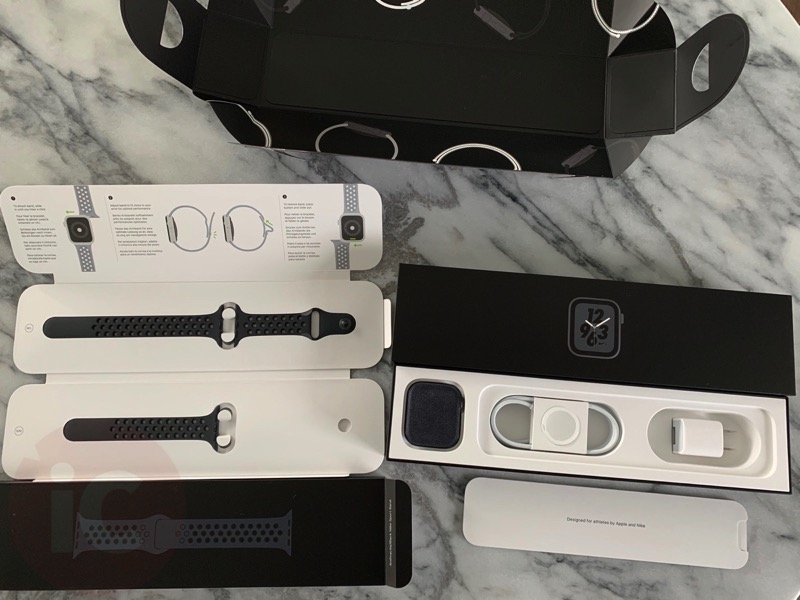 The Nike+ Anthracite/Black Sport Band looks great—but it collects dust easily out of the box. Once it gets covered in oil from skin over long-term use, this will probably dissipate. It feels slightly stiffer too, compared to my Nike+ band on my Series 2. 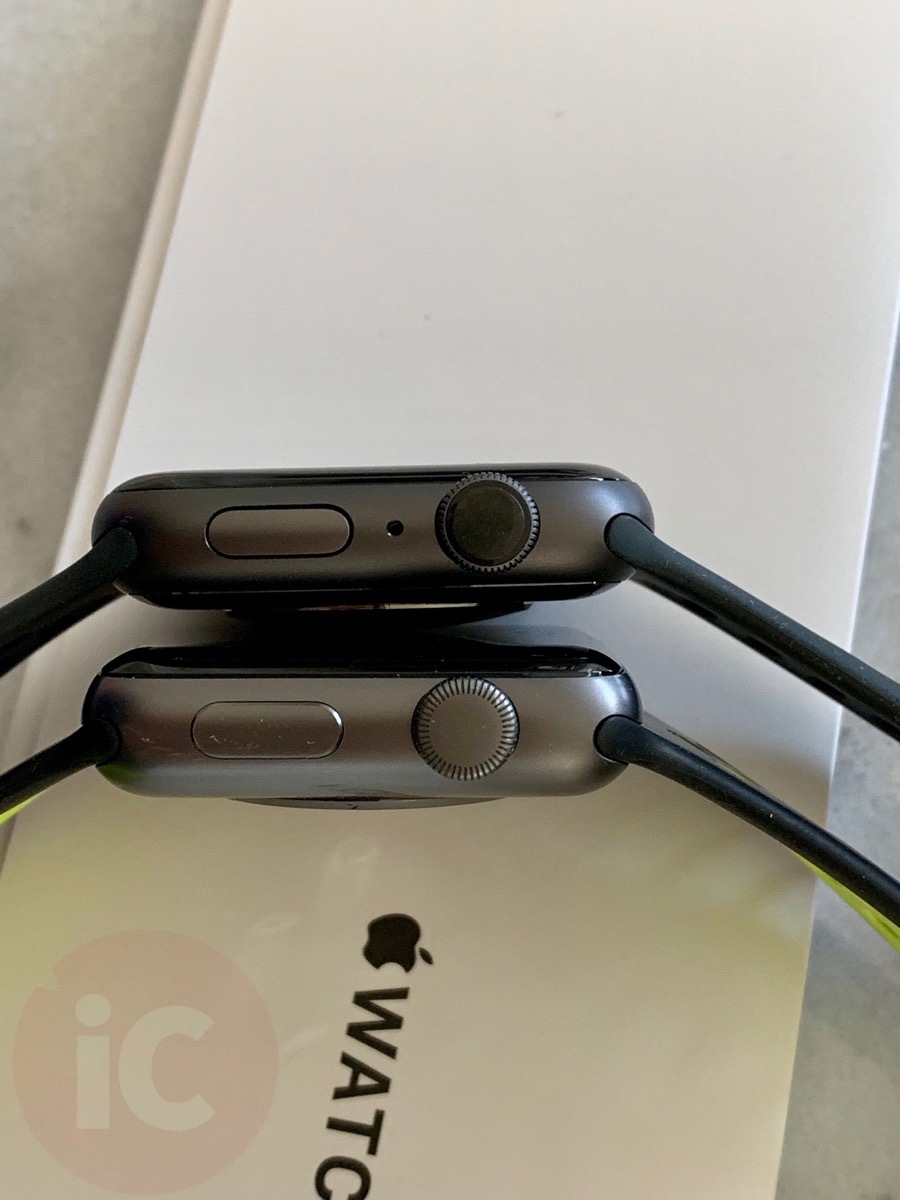 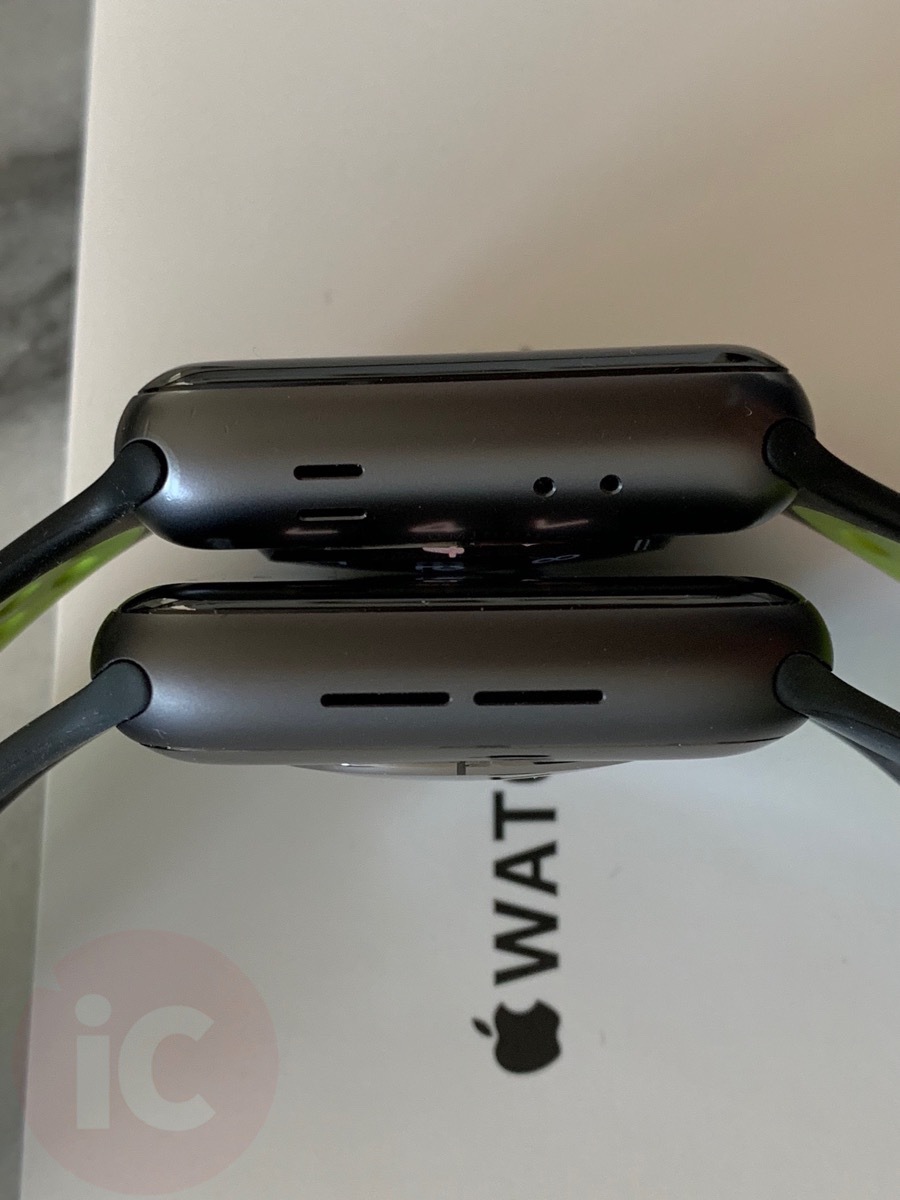 There’s a lot of packaging with this new Apple Watch and it feels excessive, almost unnecessary. The Apple Watch when it delivers, is also packed inside a cardboard box, which uses two plastic foam pieces to securely hold the package in place. I would like to see Apple use cardboard instead of plastic foam here, since the company touts the environment all the time. You’re essentially opening three boxes to get access to your Apple Watch Series 4.

Turning on Apple Watch Series 4 for the First Time

Immediately after powering on the Apple Watch Series 4, the impact of the 30% larger display which now goes closer to the edges, is instantly noticeable and satisfying to look at. After pairing with my iPhone XS Max, I was off to the races. 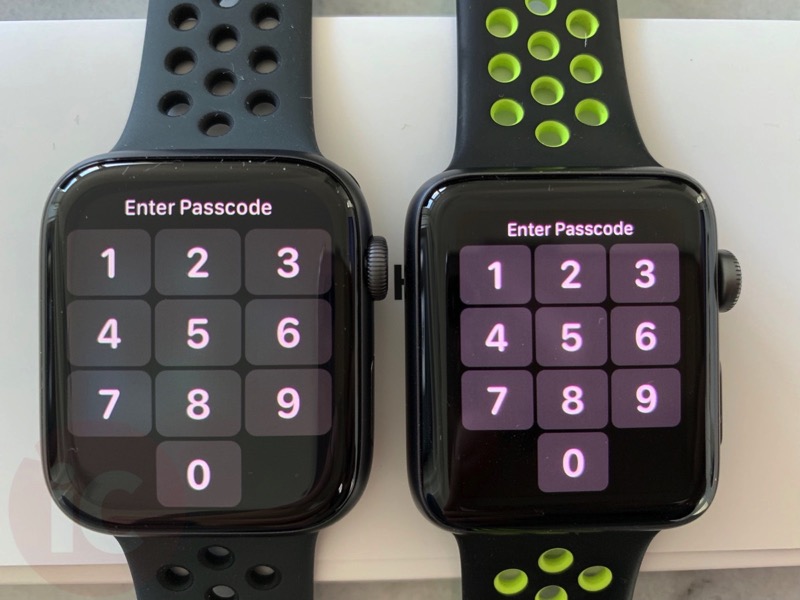 It’s now much quicker to reply to friends when they finish a workout, punch in your passcode, launch apps and more, things that tested my patience with my Series 2. Receiving notifications is a real treat, as every alert is just so much bigger. You can see more detail in your Nest camera alerts now.

The new Digital Crown has haptic feedback during scrolling which feels really nice, and makes you wonder why it wasn’t there before. It feels smoother than the Series 2, but we’ll see how this holds up after a few months of being in the shower.

The power button design no longer has an audible ‘click’ like the Series 2, and the button itself is seamlessly blended into the side of the watch, making it invisible when looking down.

The watch’s thinner design is also noticeable too, as the watch just feels better on the wrist now. 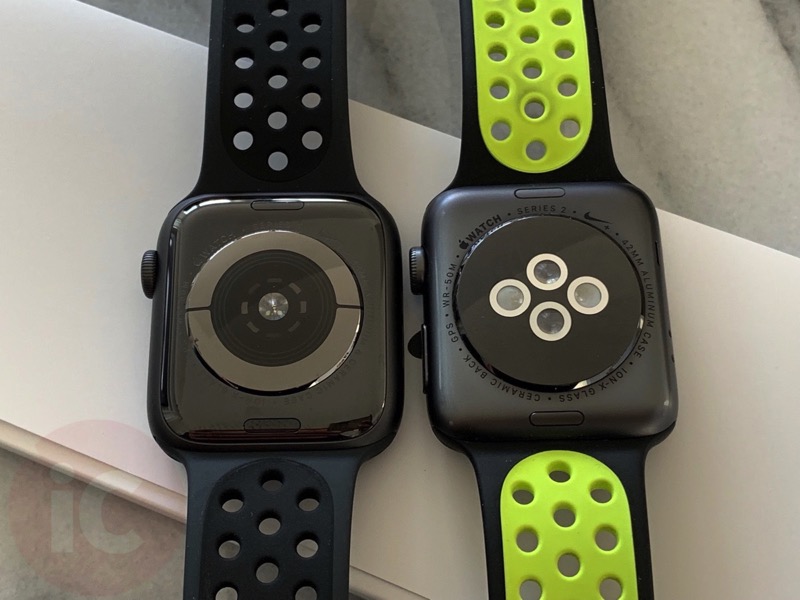 The heart rate sensor has been redesigned and includes hardware to record “an ECG similar to a single-lead electrocardiogram”, but of course this feature is not available in Canada yet, as Health Canada is apparently in talks with Apple to approve it for the market here. Users in the USA will soon get an app to unlock the feature, which will only be limited via region settings. So that means Canadians will most likely be able to try the ECG feature soon when it launches for the U.S. later this year. 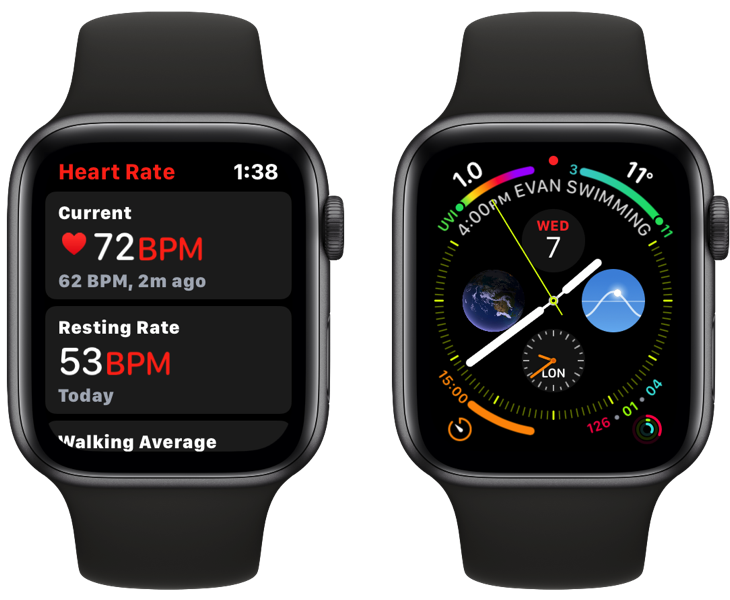 With Apple Watch Series 4, new watch faces are available, including the new Infograph watch face, which can display up to eight complications, taking advantage of the larger display and now rounded corners.

Why does this watch face lack the Messages complication? Only favourites are available. Other new watch faces are similar #AppleWatchSeries4 pic.twitter.com/pVWF7SDrlL

Apple reportedly plans to fix this though with a coming watchOS 5.1.2 update, but seriously, this should have been there from the start. Because of this, I’ve been sticking to traditional watch faces where the Messages complication is available. Using my Apple Watch to quickly glance for unread messages is one of the biggest reasons why I’m wearing one.

Aside from the above, there is also a new Nike+ analog watch face, as seen below. They’re really nice but I rarely use them (along with Nike Run Club), as I’m a fan of the modular watch face: 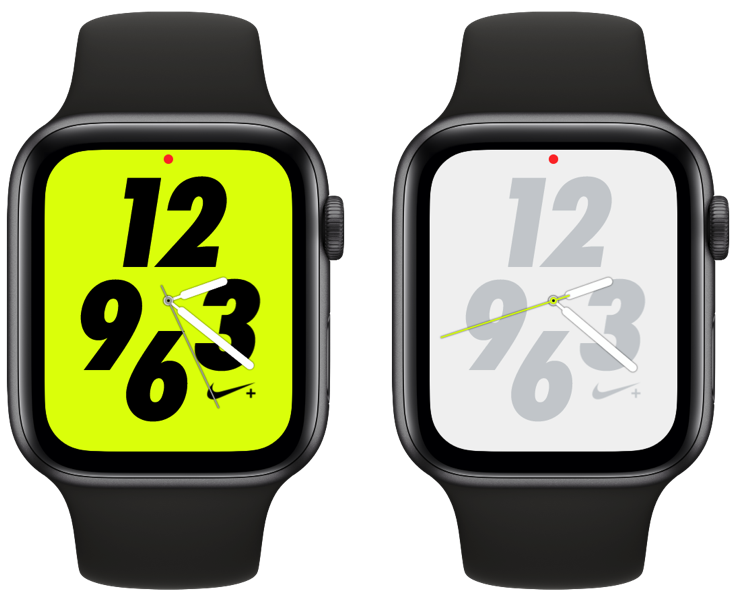 With the new S4 chip in Apple Watch Series 4, it makes for a totally overhauled watch experience, especially coming from a Series 2. Moving around watchOS is so instant and fluid, it makes me want to chuck my Series 2 running watchOS 5 into the garbage (well not really but you get what I mean). Series 4 couldn’t have come at a better time and the lightning fast system speed is probably what first-get Apple Watch adopters hoped for.

Now, using Siri with Apple Watch actually works (well, we use “works” loosely here) for setting reminders, controlling HomeKit devices and more, thanks to the new and improved microphone.

As for the improved speaker, it’s a huge improvement as it can get really loud when Siri responds to you (she can talk!) and for taking phone calls.

When connected to Wi-Fi only and not your iPhone, the Series 4 allows you to use dictation to reply to messages, whereas this was not possible with Series 2.

As for battery life, Apple says you get up to 18 hours and by the time we plugged in the Series 4 to charge at night, the percentage pretty much always showed 65-70% or so remaining.

We didn’t pretend to be a crash test dummy and try out fall detection (#saynotoconcussions), but we’re hoping we don’t need to ever test it out. We’ll trust that it just works. 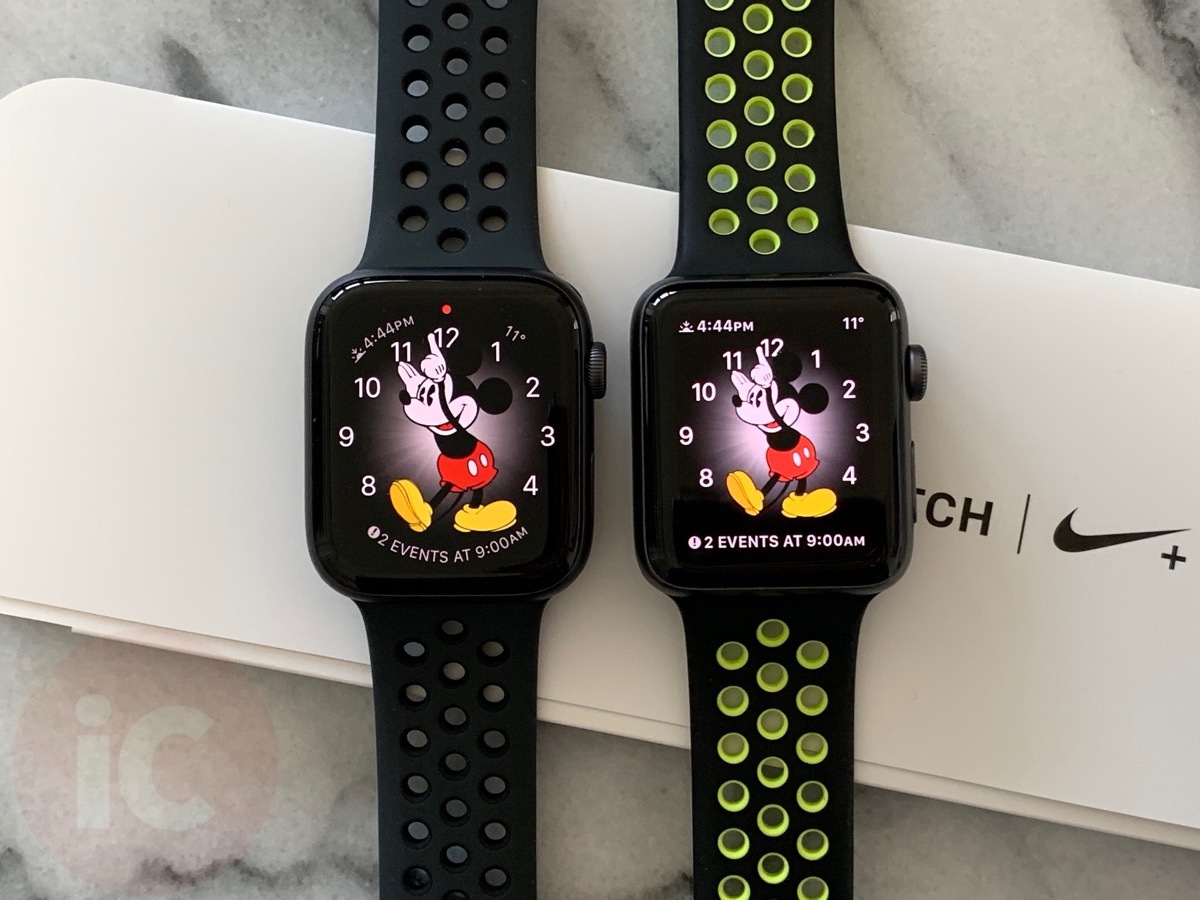 Mickey is now slightly bigger than before.

The majority of my exercise is through cycling or running or playing ice hockey (okay, I’m really just eating Cool Ranch Doritos on the couch). For cycling and running, I like to record my activities using Strava (via my Garmin 520 or Garmin 920xt), which then is able to write data to the Health app and towards my exercise rings.

Apple needs to open up workouts on watchOS to allow for native saving of activities to third-party apps. Once it does, it will be much more convenient launching up Workouts on Apple Watch, instead of going through a third party app.

When I’m cycling, I’m wearing a heart rate monitor on my chest, plus I have a cadence sensor and speedometer on my bike. These ANT+ sensors aren’t compatible with Apple Watch or iPhone. So my cycling activity first saves to my Garmin GPS, which then uploads data to Strava and Apple Health.

For running, I usually wear my Garmin heart rate monitor and use my Garmin 920xt to track runs, which then follows the same process as my bike rides when I save my activities. When I’m too lazy to strap on a heart rate monitor and get my Garmin, I’ve ran with just my Apple Watch Series 2 and the Strava watchOS app (with my iPhone on me while running; a cellular Apple Watch would let me ditch my iPhone at home). During these workouts, I’ve found the Apple Watch heart rate and pace tracking is off or all over the place. I’ve yet to take this Series 4 on a run (#becausepizzaandnetflix), but once I do, I’ll update you guys (I pinky swear…sorta).

Also, the water lock feature, which locks your display for your swim workouts, now no longer uses a high-pitched buzz to eject water from the device’s speaker, but now rather a lower and less annoying humming sound.

Conclusion – Apple Watch Series 4 is the One to Buy

The moment I saw this new larger 44mm display, I knew the Apple Watch Series 4 was going to stay put and replace my ‘aging’ Series 2. The latest S4 processor makes using Apple Watch such a joy now, finally. It’s much easier to respond to notifications, apps open much faster when I actually use them, and the experience with Siri has gotten better (but Siri itself still needs work).

While Apple still needs to fix missing complications such as a standalone Messages option for new Infograph watch faces (that can be easily fixed by an update), the new Apple Watch Series 4, on a whole, is pretty great and worthy of an upgrade if you’ve been using a Series 2 or older. A Digital Crown with haptic feedback just feels so nice.

But with this ‘new’ Apple we’re seeing, starting prices for Apple Watch jumped this year. The entry 40mm Apple Watch Wi-Fi now starts at a hefty $519 CAD, which is more expensive than the 38mm Apple Watch Series 3 last year at $429 CAD. Yes, I get we have new technology such as larger displays, an ECG and a new design, so those things apparently cost extra. If you’re sporting a Series 3 Apple Watch, you probably don’t need to upgrade until Series 5 makes its debut at some point in time.

How are you liking your Apple Watch Series 4 so far?

Click here to shop the Apple Watch Series 4 from Apple.ca.