We’ve covered a few different ways to enjoy streaming radio on your iPhone so far. Such notable examples include FlyCast, Astral Media (for listening to Virgin Radio 95.3), and TEAM 1040 via FStream.

In the comments of my TEAM 1040 post from days ago, user Bruce posted about the new FREE Corus Radio App for the iPhone. I immediately downloaded the app to try it out and from what I’ve seen so far, it’s fantastic. The layout is easy to use and it covers the 52 stations available from the Corus Radio Network! For all you AM radio junkies you can now get your radio fix! 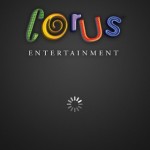 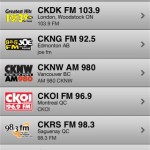 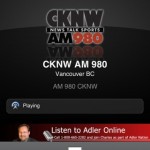 Here’s some interesting information the app fails to admit:

The “shake the shuffle” feature allows the user to shake the device and be offered a random Corus radio station. The application also leverages the Dolby Advanced Audio Coding (AAC), enhancing the listening experience at the lowest data consumption.

Shake to shuffle feature! When you’re on the station list view, just shake the app and you’ll get a random radio station sent your way. In terms of data, I wonder how much AAC uses? Anyone know? Regardless, this app is definitely something you need to download via the App Store. Apps like these make my iPhone even better than before. I swear my iPhone has now turned into the ultimate portable radio as well.

Here is a list of all the stations you can listen to, from coast to coast: 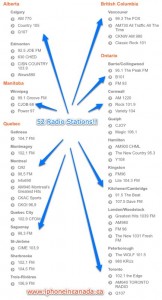 Where do you live and what Corus Radio station do you listen to? For me, I am always hooked on CKNW 980 when I’m driving in the morning (I know, boring). You guys?