We got our hands recently on a review unit of the Eve Light Switch—let’s check out our quick review. 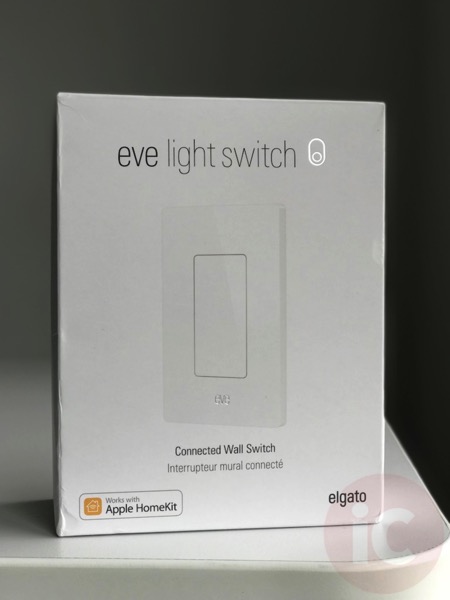 There’s not much to unboxing a light switch, but the Eve looks simple and elegant. Inside is an instruction booklet, face plate plus mounting screws. It’s a really clean looking switch, with “eve” printed on the wall plate: 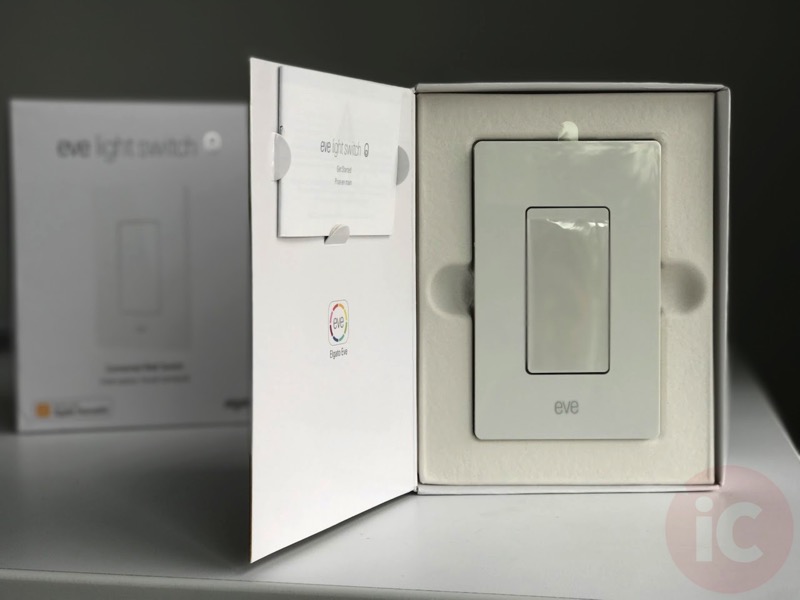 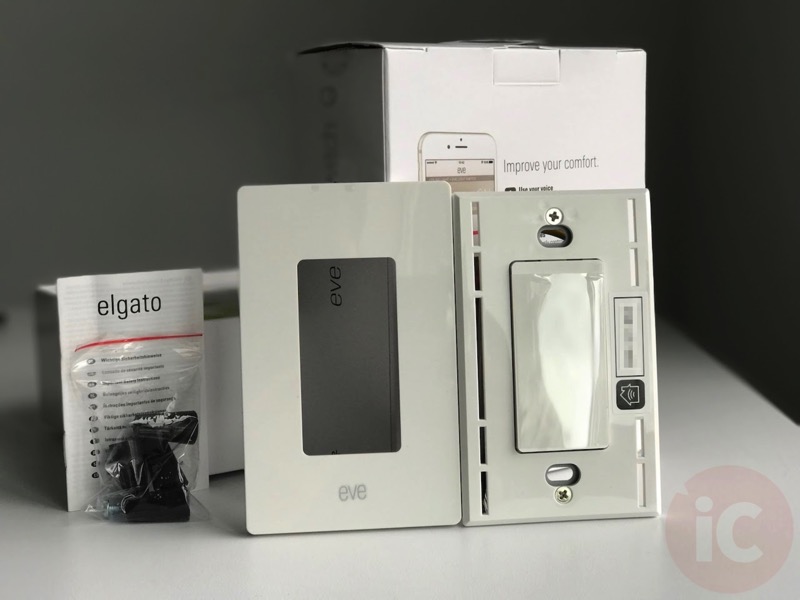 This is the back of the light switch, showing the wires required to install into your existing light switch panel box. You can forego the frame and just have the switch itself installed, which is what we got our electrician to do. Note: this switch won’t work with a 3-pole installation or dim your lights. 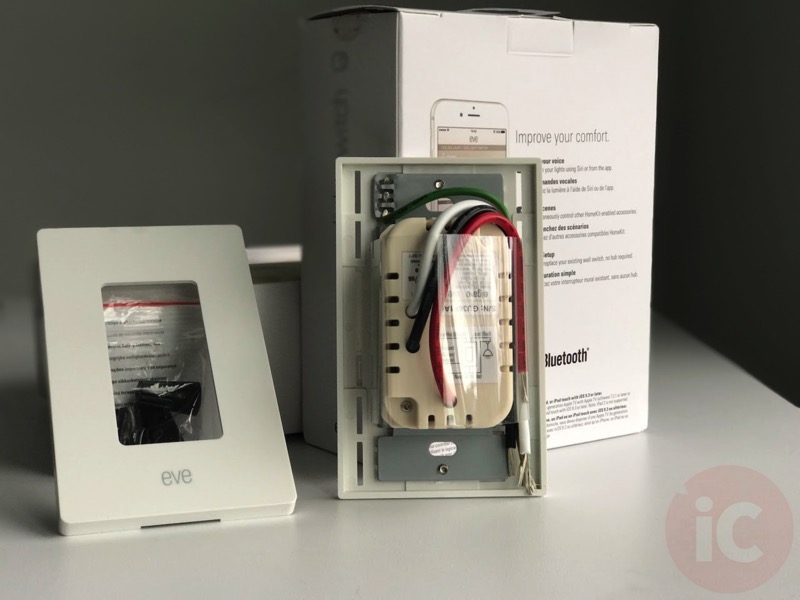 The Eve Light Switch doesn’t have a physical button like a typical light switch, but rather a capacitive touch sensor instead. The unit replaces a single pole switch and uses Bluetooth Low Energy for its setup and operation. Like any other HomeKit product, to control the switch when you’re away from home, an Apple TV 4 or iPad is required to act as a Home hub.

Our electrician said it was extremely simple to install and was impressed with unit and its HomeKit compatibility. We mounted it without its front plate to control the light outside the front door. Now, I can use Siri to turn on and off the front light, or setup an automated scene using Elgato’s Eve Motion. Quick access to the Home app’s Favourites in Control Center means instant access to the switch.

Adding the Eve Light Switch to our HomeKit setup couldn’t be easier. Just launch the Home app, then tap the “+” in the top right, and select ‘Add Accessory’. The Eve Light Switch will pop up, tap it, then enter in the HomeKit security code (located on the switch itself and the packaging; remember the code before you trash the box!). 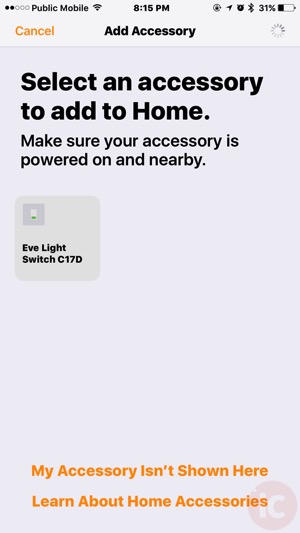 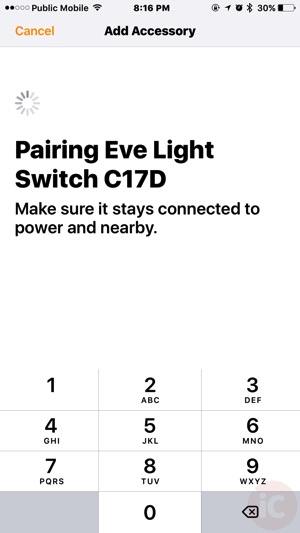 In the final step, you can detail the light switch’s location, rename it or add it to your favourites. 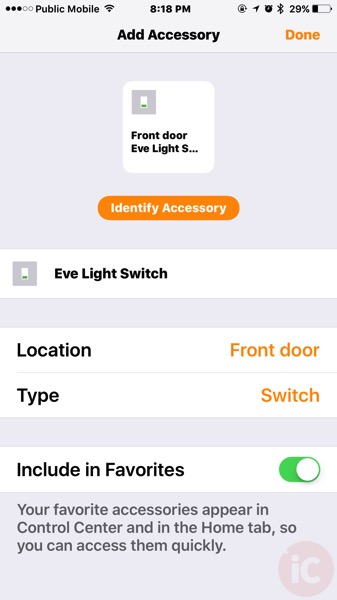 When the Elgato Eve Light Switch is off, a green LED shines, making it helpful to see the switch at night for those without HomeKit access (guests, family members, etc) and also providing a touch target: 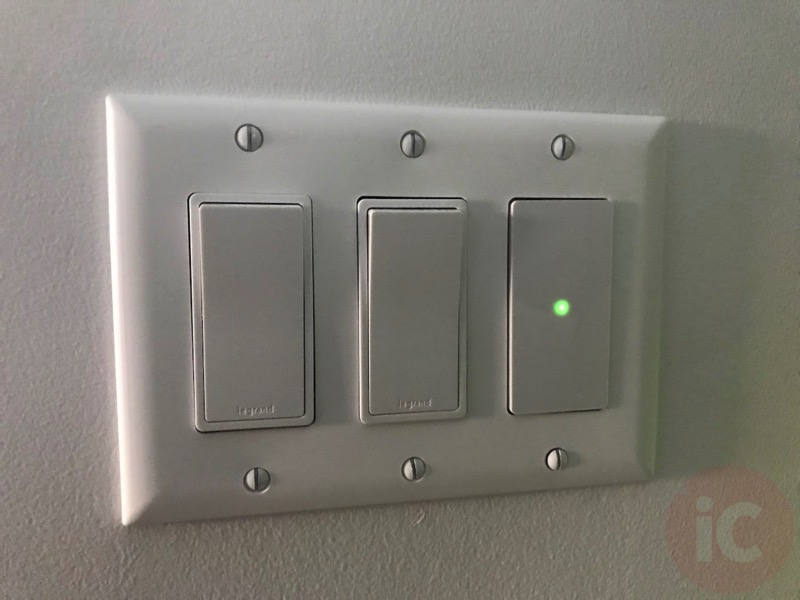 When the switch is on, the LED is off: 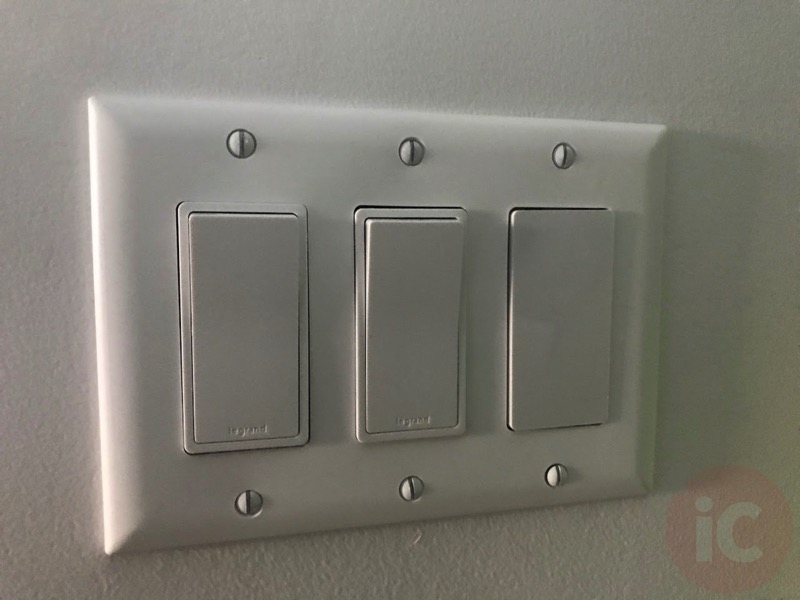 We noticed the switch makes a slightly audible ‘click’ sound when you tap it on and off; it’s not annoying by any means, but it’s there.

The Elgato Eve Light Switch looks great with its minimalist design and functions very well with HomeKit and Siri. The possibilities are endless as to where you can install this in your home, whether it’s to control your lights or to turn on an appliance. Using Apple Watch and Siri to control our home is pretty cool.

The Eve Light Switch retails for $66 on Amazon.ca (it’s $69.95 from Apple) so it’s definitely an investment if you’re building out a HomeKit home. The price may be worth it to some to who want the convenience and security of Apple’s HomeKit. Reviews on both Amazon and Apple are pretty positive for the Eve Light Switch, and we have to agree, as so far it has worked exactly as described.