The easiest way to let people know where you are is to let them stalk your location via Foursquare (or Google Latitude). The company has just announced they have passed 1 billion check-ins, by over 10 million users, an impressive feat.

They Foursquare team has compiled a video using check-in data from around the globe to make the following video. Check it out:

A Week of Check-ins on the Path to One Billion from foursquare on Vimeo.

On top of that, they also announced an update to the Foursquare iPhone app to include Foursquare Lists, a new way to track places you want to go:

foursquare has a brand new ‘Lists’ tab that lets you keep track of your favorite places and the places you want to go. It has your lists, your friends’ lists, and a ton of suggested lists from the 10,000,000-strong foursquare community. It makes exploring even easier… have fun out there! 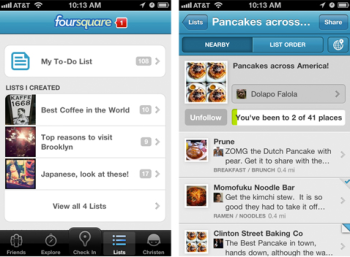