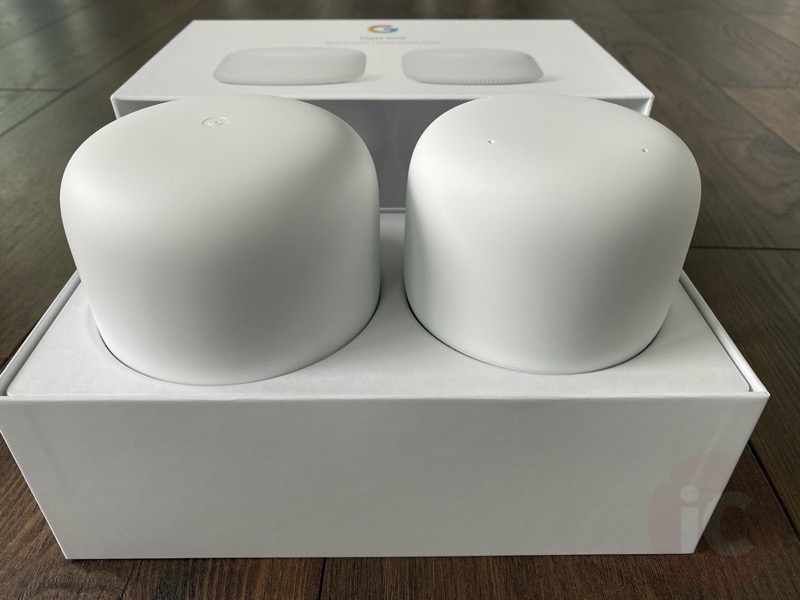 Google announced its next-generation Nest Wifi mesh Wi-Fi solution, the successor to the 2016 Google Wifi, back in October. The Nest Wifi now comes with a main router point and separate Wi-Fi points.

We’ve been going hands-on with the new Nest Wifi (router + 1 point) the past couple of weeks, but at first, we got stuck at the setup process. It wasn’t supposed to be this difficult. More on this later.

Unboxing the Nest Wifi, you’ll see a pleasing new design to the router and Wi-Fi point pods, with a new rounded design to better blend into your home’s furnishings. The 2016 Google Wifi just looks dated in the picture below. 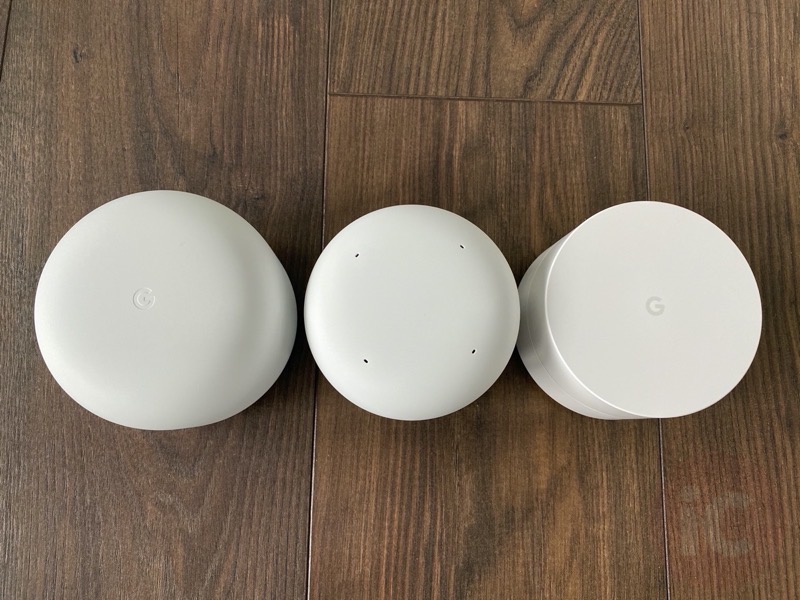 This time around, the router point it the only pod that has an ethernet port. All the other Wifi points only don’t have them, unlike its predecessor, so that’s a bummer for those looking to connect ethernet devices in different areas of the home.

For 2019, the Nest Wifi gets set up through the Google Home iOS app instead of the Google Wifi app. It is possible to add your old 2016 Google Wifi points to your new Nest Wifi setup, by picking the correct option during setup. 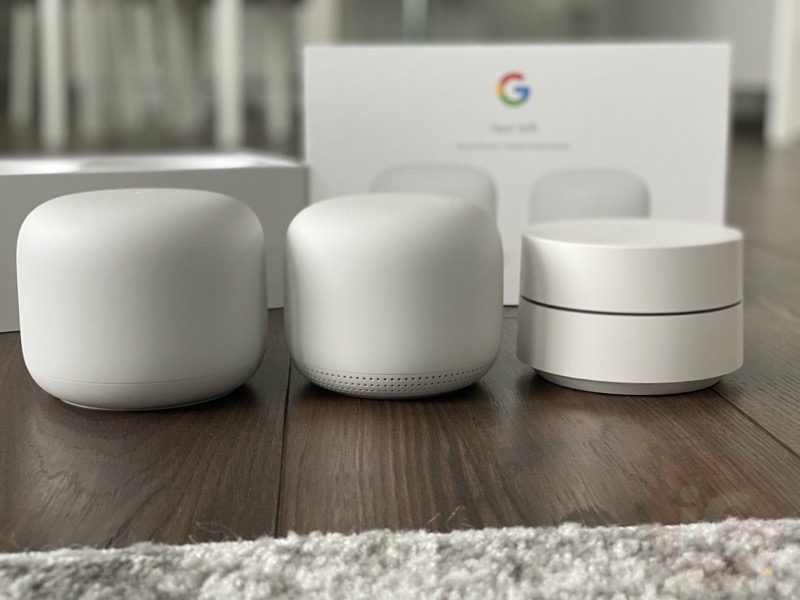 In our case, we wanted to test how the new Nest Wifi would compare to our 3-pack Google Wifi, on its own. This is when the troubleshooting began…

We’ve set up Nest and Google devices before, including the Nest Hello, outdoor cameras, Google speakers and more. We are very familiar with the Google Home app and it’s usually pretty straightforward to set up a new device.

But, this time around, the set up gods weren’t in our favour. While the Nest Wifi router would appear as a device ready to set up, the setup would always end in error.

We troubleshooted like an insane person to get this working, even chatting with a Google Support online (they were great). No dice. It wouldn’t create a network using this Nest Wifi router point. 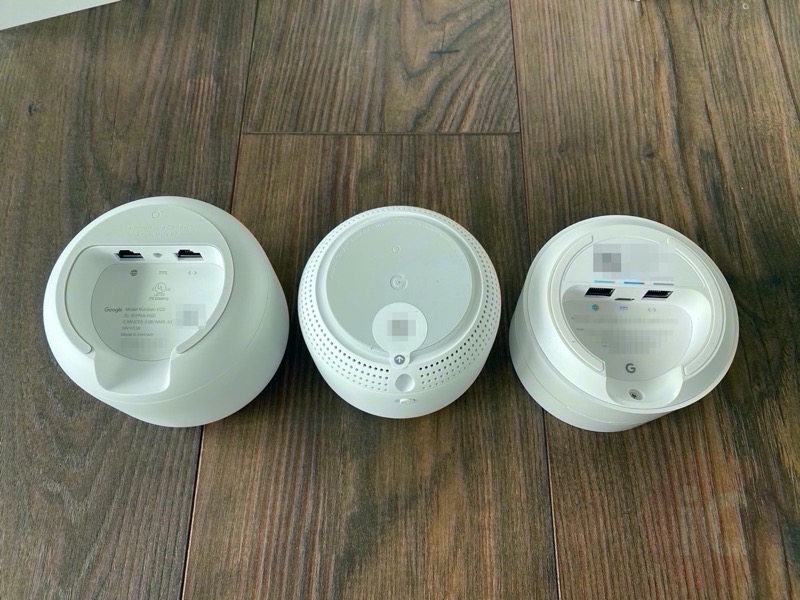 We did the typical troubleshooting methods such as disconnecting the power from our ISP modem for a few minutes, factory resetting our old Google Wifi, resetting the Nest Wifi router (multiple times), resetting my iPhone network settings, deleting the Home app and reinstalling, but nothing would work.

It is possible to connect directly to the Nest Wifi router point manually through your Wi-Fi settings on iPhone. Just tap the SSID and enter the password located on the grey underside (it’s really hard to see) of the Nest Wifi router. From here, we were able to perform some simple speed tests that accurately reflected our internet speeds, but this was with zero devices connected aside from my iPhone 11 Pro Max. 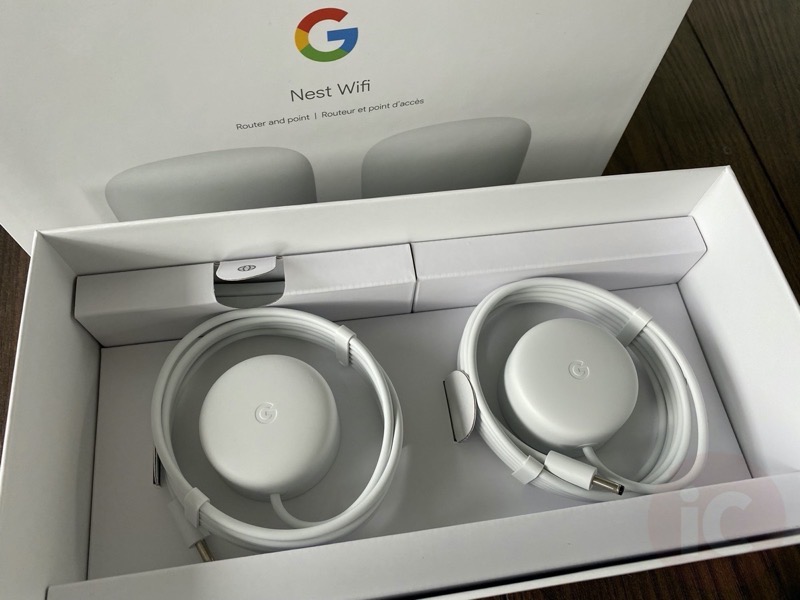 After this frustrating experience, Google sent us another Nest Wifi and we started the process all over again a week or so later.

Magically, the new hardware let us set up the Nest Wifi router just by inserting our existing ethernet cable from the Google Wifi, which was our main intention. We didn’t change anything from before and finally, it frickin’ worked. You may need to power cycle your ISP’s modem (unplug it and wait a minute then plug it back in), to let it assign an IP to the new Nest Wifi. 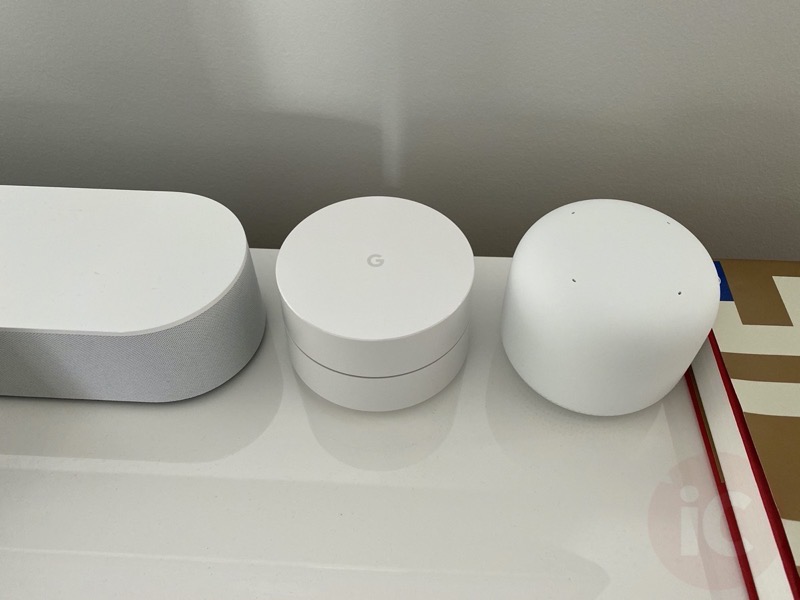 Now, we were finally able to follow the setup prompts in the Google Home iOS app. You are asked if you want to create a new network or add to an existing network. We opted to create a new one to compare speeds and range with just two points versus our Google Wifi and its three points.

After scanning the QR code on the back of the Nest router point located in our office, we were off to the races as our new network was being set up, which took at least a few minutes. 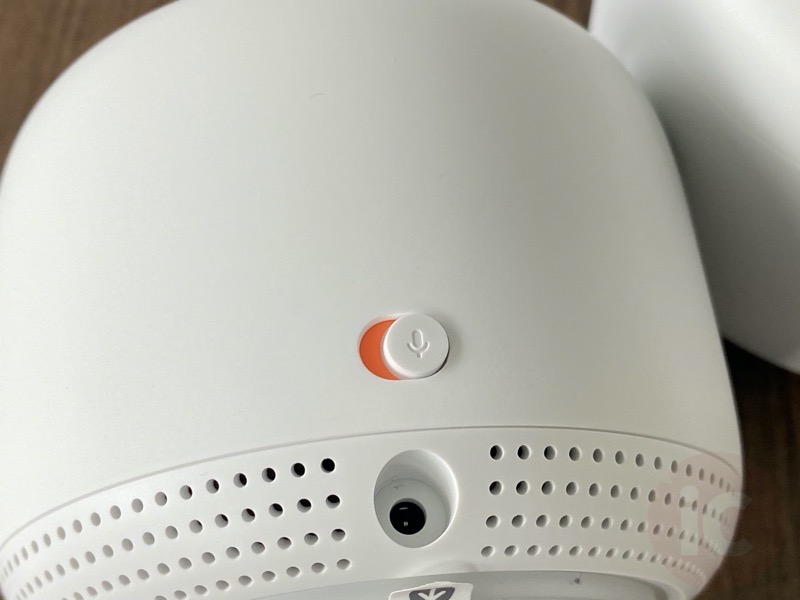 The back of a Nest Wifi point: you’ve been muted.

With the Nest Wifi point powered by Google Assistant, you can now ask “Hey Google what’s my network speed” and it’ll quickly perform a test and read the results out loud.

So let’s see how the new Nest Wifi network fared in casual speed tests using the Speedtest.net and Fast.com on our Mac using Google Chrome. Our internet plan has download speeds of up to 600 Mbps. Here are the speeds next to the Nest Wifi router: 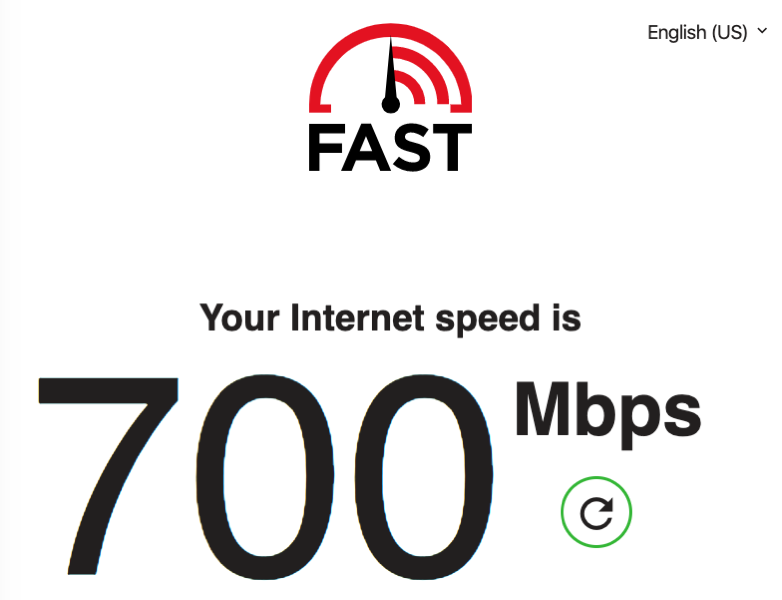 Speeds were about the same as our Google Wifi speed tests, but what about the range of the Nest Wifi with just one router and one point? A variety of factors can affect range and speeds, but we didn’t notice much difference here in one ensuite bathroom where speeds are slow because of the Faraday cage-like location of the toilet. Sometimes signals would drop and buffering of YouTube videos with Google Wifi would ocurr (#dontjudgemebro). How did Nest Wifi fare?

We didn’t notice a big enough difference as download speeds were about the same in this location. But downstairs in the garage, only having two Nest Wifi units is where the signal suffered. Our Google Wifi setup had better signal speeds as our third point was in a nearby hallway. We didn’t have a third Nest Wifi point on hand to do an apples-to-apples comparison.

With Nest Wifi, the same features you had in Google Wifi are available, such as easily creating a guest network, prioritizing internet to specific devices, being able to pause Wifi for individual or groups of devices (watch out kids), and just in general having a self-managed mesh Wi-Fi setup that installs updates on its own. It’s all really simple to use and manage in the Google Home app.

For those who have been on the fence about Google Wifi, Nest Wifi is worth it because Black Friday pricing has it the same as its predecessor. You get a newer design that blends better in any home, plus Google Home support in your Nest Wifi points. You will lose dedicated ethernet on Nest Wifi points versus Google Wifi though and there’s no next-generation Wi-Fi 6 support.

Nest Wifi is an easy way to get a mesh Wi-Fi setup going for your home that just works, but if you’re looking for the best performing router with geeked out controls over all networking aspects, you may be better off elsewhere. You will require a Google Account to manage the Nest Wifi, so for those who don’t trust Google with their data, this is something to keep in mind. At the regular price of $429 for one router and two points, it’s also more expensive than its predecessor, which was already seen as pricey for $379.

However, Google has its Nest Wifi router and 2 points available for $379 CAD right now for Black Friday, saving you $80 off its regular price of $429 CAD.