Just two and a half weeks ago Opera Mini 5 was submitted to the App Store for Apple’s approval. Well, according to a recent post by TechCrunch, the folks at Opera have confirmed that Opera Mini has been APPROVED!

The app should be available for download in the next 24 hours depending on where you’re located. I just checked the Canadian and US App Stores, but nothing yet. This is awesome news for iPhone owners as we’ll get to experience another internet browsing experience that is not via Mobile Safari. It’s interesting that Apple approved the Opera Mini 5 app. Some would argue that Apple, known for their control to ensure quality would allow an app that replicated a similar function as Mobile Safari.

Keep an eye out on the App Store because Opera Mini for the iPhone is coming soon! The screenshot below was taken from Belgium! 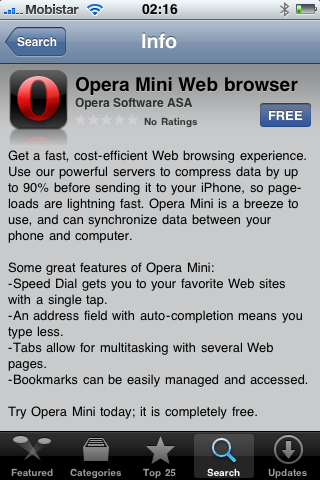 **edit** Opera Mini is now LIVE in the Canadian App Store! Go get it!