Do you record lots of video? Ever get into one of those moments when you are ‘waiting’ for something to happen, and you waste footage recording for that magical moment to occur? It happens to me often, and it results in time spent editing clips to only save the action shots.

What if there was an app that would record a buffer–before you actually started to record? Enter stage left: Precorder. I first recommended Precorder during Episode 26 of The iPhone Podcast (subscribe to our podcast if you don’t want to miss out on must-have apps!).

This brilliant app was inspired from the BBC’s Planet Earth series that focused on seal-hunting sharks. As described by Ben Kamens, one of the Precorder’s creators:

Whenever the Planet Earth cameraman saw a shark jump, heâ€™d run over and slam his hand down on (what I picture to be) a big red button w/ the word â€œSHARK!â€ painted on it, and the last few seconds would slowly be saved permanently somewhere in the hope that they captured a gorgeous clip.

The Planet Earth team edited their shots live and dumped all the boring stuff by waiting for something exciting to happen before recording any footage.

That was the inspiration for the side project Jason and I just launched, an iPhone app that constantly saves the past few seconds of video so you can wait for something exciting to happen before you hit record without worrying about missing something.

So with the above in mind, Precorder makes it incredible easy to record all those action shows without wasting footage or editing. The interface is elegant and by tapping and holding on a wheel, you can set your buffer from 1-10 seconds.

When your action starts happening, you tap record as normal. When you stop recording, Precorder will save your clip–plus the extra seconds of buffer before you tapped record. It’s ingenius, and this is a must-have app for live sports fans and parents recording their kids. I’ve used Precorder and it’s worked flawlessly for all clips I’ve recorded. You can easily email or post clips to Facebook afterwards, and all clips are saved to your Camera Roll. 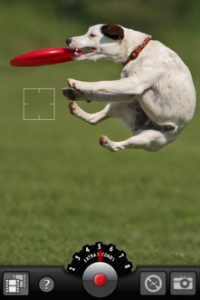 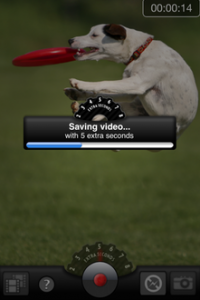 Prerecording is a feature that you will see in high end video cameras, and it’s awesome that you can now utilize your iPhone to do the same. Precorder easily makes it into one of my must-have Photography category apps of the year. Apple needs to pay attention here.

What I would like to see in the future is the addition of picture taking within Precorder, so it can replace the default Camera app. It’s a pain to switch back and forth.

Anyone out there already using Precorder? Let me know what you think of it!

Want to try Precorder for free? If there is enough groveling and begging (hint), I bet the Precorder team will offer some promo codes!