Hey everyone, my name is Jordan. I’m the new guy around here. I love the iPhone and all things Apple, so I’m going to be sticking around for a bit to keep you guys in the loop.

Let me start off by saying this is one of the best games to hit iOS devices yet. Out of the plethora of crappy games in the App store there are a few that shine through the dense fog of terrible and give us a gaming experience that most would expect from a console. Let’s Golf 2 might just be one of those games. 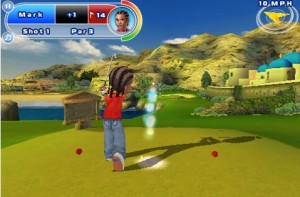 This game has almost everything that a sports gamer might want, tough courses, many unlockables, colourful characters, and just a good time all around. Compared to its App Store competition, games like Tiger Woods, and Real Golf 2011, which go for straight up realism, Let’s Golf 2 goes for fun.

It has goofy cartoon characters and little animals that look like they where kidnapped from a 80â€™s Disney movie running about the course. Over the top Courses go for full scale mini golf feel (which works wonders). At the end of the round all you want to do is jump into the next course to see what messed up world you have to navigate that little white ball through.

The game is well made and very easy to pick up. The career mode is quite long and there are tons of things to unlock to give your bobble head character the edge in your next tournament.

After your many hours in single player you still have multiplayer, yeah that’s right, full blown multiplayer. There is Bluetooth, WIFI, and Network play. Not only can you play with a buddy on his iOS device sitting next to you, but also some random player anywhere in the world. 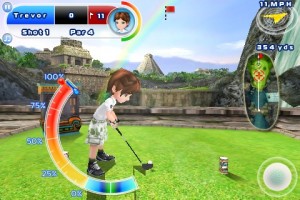 Gameloft has their very own online setup. If you dont have your Gameloft ID and password all you need to do is grab one, it’s very easy. After the usual sign-up, User Name and Password etc. You are then ready to rumble online. Create your own game with lots of rules to tweak, or just join a room already created. It is that easy. The only bummer is when someone bails on a round when you are waxing the course with them.

After putting many hours into this game my only issue is that I want more courses. Either than that this is one of the App Store’s best games. For the price of a latte that gives way more than a crappy cup of caffeine, what’s there to lose?