Opera Mini 5 has been approved by Apple and is now LIVE in the Canadian App Store. It went live last night and I immediately downloaded Opera to see just how the app fared. This mini (no pun intended) review will offer my initial impressions of Opera Mini for the iPhone.

Opera Mini for the iPhone – Looks Really Nice Until…

Downloading Opera Mini was a snap. Launching the app took no time at all. Using the app and navigating was a whole different story. Speed is where Opera Mini excels. Here are results from my casual speed test over 3G:

Opera Mini is very fast, in part because pages are rendered server side by Opera. Some people have mentioned the security and privacy issues of this, but if you’re just casually surfing it doesn’t really matter. I love that you can surf with multiple tabs and they all load in the background. Mobile Safari can’t do that. 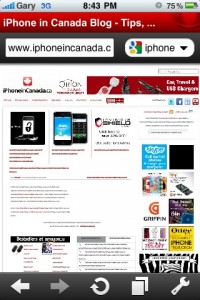 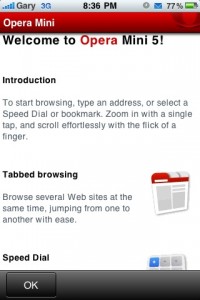 While Opera Mini is fast, its rendering of web pages looked ghastly. Web pages did not load properly (mobile versions), and surfing to websites reminded me of using my brother’s Blackberry browser–it was absolutely dreadful. Opera Mini has a hard time deciding between full versions of sites and mobile versions.

I wasn’t a fan of pages appearing with tiny lines, which required me to zoom in to view headlines, which wasn’t entirely accurate at times. The scrolling while zoomed in does not compare to Mobile Safari.

John Gruber sums it up nicely:

The iPhone uses a heuristic when you flick to scroll, such that if your finger is mostly moving up or down (or left or right) it locks you into that dimension when scrolling a view â€” such as a zoomed-in web page â€” that could be scrolled in any dimension. The effect is that when youâ€™re zoomed in on a column of text in MobileSafari and flick â€œupâ€ to scroll down, the view moves straight down, even if your flick gesture was a few degrees off. On Opera Mini, however, scrolling a zoomed-in view moves in exactly the direction of your flick gesture. The result is that scrolling an Opera Mini page feels like sliding a sheet of ice on an oil slick. Unfortunately for Opera and everyone else, Apple has been awarded a patent for this scrolling heuristic â€” and itâ€™s one of the patents theyâ€™re suing HTC for violating. So itâ€™s possible that Operaâ€™s engineers are perfectly aware of how unpleasant scrolling is in Opera Mini, but theyâ€™re forbidden from doing anything about it.

Moreover, websites did not load properly on Opera Mini, like this blog and others. Fonts were off and pages didn’t align properly. Acid3 tests resulted in a score of 97/100 for Opera Mini and 100/100 for Mobile Safari. Opera Mini just didn’t feel right. The experience wasn’t great at all and it actually made me want to delete it right away in pure frustration. 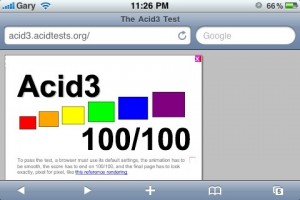 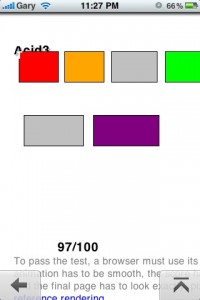 It’s nice that Opera Mini was approved, but I’m not switching away from Safari just yet. For people with EDGE connections, Opera Mini will be a god send for you. As for everybody else, I’d stick with Mobile Safari in the meantime. Let’s hope future updates will improve on this release.