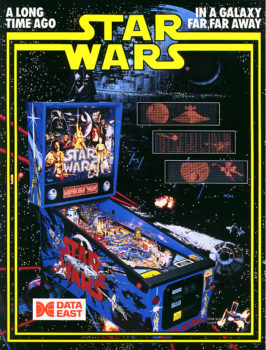 When I was in College and needed a break from studying, my friends and I would spend more than a few quarters on the pinball machines in the lounge. The two most popular tables were Stars Wars from Data East, and Star Trek: The Next Generation from Williams. So when I found out the Star Trek table had been ported over for iOS devices, I immediately bought it.

Star Trek: The Next Generation is brought to your iOS devices by FarSight Studios. The table is an in-app purchase through The Pinball Arcade app. It costs $4.99 for the full version or $7.99 for the pro version. The pro version offers you some hack type controls where you can control the ball and such. After using it, I’d suggest passing on it. I didn’t find it to be worth the extra money.

If you’ve ever played the ST: TNG table, you’ll be pleased to know everything is ported over into the digital version perfectly. You have all the sounds, voices and challenge from the original table. Yes, even the two canons used to fire the balls at targets during missions are included.

Even if you’ve never tried the original table but you’re a pinball fan, this one is a lot of fun — oh and did I mention challenging? It’s well worth a purchase. If you’re interested, my high score so far is 1,534,935,820

The other pinball table I loved to play at College was Star Wars from Data East. It’s still my favorite pinball table of all time. The Pinball Arcade actually owns the licence for Data East tables, but as of this review, it has no plans to port it over. Which is a real shame.

But no worries Star Wars fans, Zen Pinball has you covered. It just released three Star Wars themed pinball tables for its app.

The first three Star Wars tables include The Empire Strikes Back, Boba Fett, and The Clone Wars.

As with all of Zen Pinball’s tables, they are original. These aren’t ports. What this does is allow for unique pinball tables that offer a lot of cool features just not possible on real pinball tables. These three have really cool video animations and even 3D characters that will pop up onto the table. They move around and even interact with the ball. It’s pretty cool to watch Darth Vader Force crushing your ball into a million pieces right in front of your eyes.

The tables include sounds, music and the voices from the Star Wars franchise which is really cool – and as you’d expect, they are very challenging. Oh, and if three Stars Wars tables aren’t enough – there are seven more in the works.

Each of the Star Wars tables are in-app purchases and cost $1.99 each. If you’re a Star Wars fan, or just a pinball fan, these tables are a lot of fun.