Are you on Twitter yet? If you aren’t that’s fine, just send me a message when you decide to get out of the stone age. Anyways, for you tweeters/twatters out there you have a few choices of Twitter apps for the iPhone. Tweetie, TwitterFon, Twinkle, etc…the list goes on.

Yesterday I got my hands on a brand spankin’ new iPhone Twitter app. It’s called TweetStack and it’s the product of b1te based in the UK. What makes TweetStack so different from the others out there? Well, the main feature is that it has GROUP support just like TweetDeck for your PC/Mac! 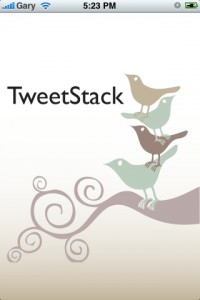 Typically, if you are following hundreds and thousands of people, your main Twitter stream can be overwhelming with 200+ tweets being loaded upon start up. However, if you have group columns for “friends”, “family”, or “business” etc, it makes using Twitter a lot easier.

With TweetStack, you can now have this functionality right on your iPhone! Let’s check out the features of their initial release: 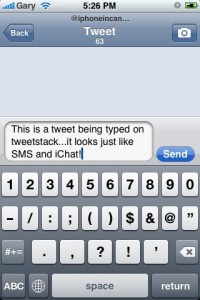 Importing your Groups from TweetDeck into TweetStack

Now I thought this was pretty cool–you can import your groups from TweetDeck directly into TweetStack. Just follow the instructions on the TweetStack website, then once you login to TweetStack on the iPhone your groups will be there.

Here is a snap of one of my groups on TweetStack and the same group from TweetDeck (it’s nice to have the red notifications along the bottom): 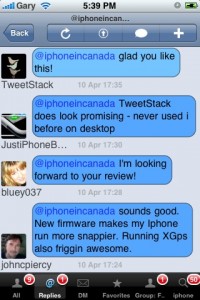 Replying, retweeting, sending a DM, and favoriting a tweet is very simple. Just tap and this menu appears: 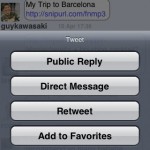 One of my pet peeves with other iPhone Twitter apps is not being able to @ replay to multiple people easily. With TweetStack, all you have to do is enter an @ and the first few letters and the names will appear! Love it… 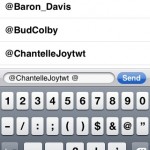 TweetStack is a full featured iPhone Twitter app that we’ve all been waiting for. It supports multiple accounts, is easy to use, and the layout of the app is very pleasing on the eyes. Here’s a conversation view of tweets (TwitterFon also has this): 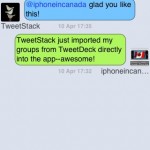 The only downsides of the app so far is that it takes a long time to load, which takes it into the territory of TwitterFon. Tweetie so far is still the quickest iPhone Twitter app I’ve used so far. But these other apps can’t touch the new layout and group features that TweetStack offers!

Also, in terms of pricing TweetStack is $2.99, which is the same price as Tweetie. TwitterFon is free, but is still one of the most feature-rich Twitter apps if you’re on a budget.

But what makes TweetStack rise above the other apps out there? Yes, you guessed it, the ability to have GROUPS on your iPhone! This is exactly what I’ve been waiting for and now we’ve got it! This in itself 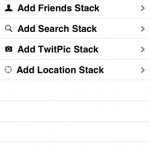 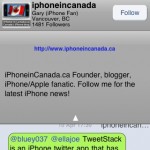 Vimeo Video of TweetStack in Action:

Contest Time! Enter to Win a FREE Promo Code to Try Out TweetStack for Yourself!

The developers of TweetStack are so excited about the launch of their app, they have generously provided one promo code for me to give away on the blog! Since this is a Twitter app for the iPhone, it only makes sense that it takes place on Twitter, right? 🙂

I just entered to win a FREE copy of TweetStack for the iPhone: http://bit.ly/tweetstack You can too! Follow @iphoneincanada and RT!